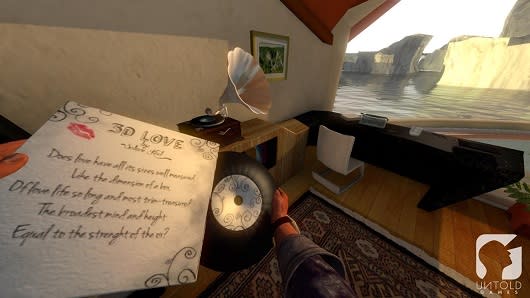 There's something unsettling about a VR game set in a someone else's digitized mind, the kind of unsettling that makes us question who we are and go looking for the holes in our neck. That said, Untold Games' concept of "Eternal Sunshine of the Spotless Mind meets Monkey Island in virtual reality" has our interest piqued in Loading Human.

The Eternal Sunshine drop - great movie - derives from the plot. You play as André Gibson, a writer suffering from the degenerative memory disease Alzheimer's. Your wife, seemingly unbeknownst to you, transfers your mind into a digital program called Loading Human. There you have to relive your life to complete the procedure and preserve your memories. It sounds very philosophical, if a little confusing - why does she die if the transfer fails?

The Monkey Island side comes from point-and-click gameplay made pseudo-tactile by combining the Oculus Rift with motion controllers like the Sixense Stem or Razer Hydra. According to Untold, each object in the game has an interactive script, such as a ringing phone that you can answer, and put to your ear to hear louder.

Loading Human is due on Windows PC and Mac this year. If you're interested but Rift-less, it'll also be playable on monitors, but you'll need a "supported motion-based controller."
Show full PR text
LOADING HUMAN – THE INTERACTIVE ADVENTURE GAME EVOLVED


27 January 2014 – Rome, Italy/... Today, Untold Games announced Loading Human – a Virtual Reality adventure game powered by groundbreaking controls and set in a thrilling sci-fi world. In Loading Human, players take on the role of André Gibson, a writer who is forced to relive his memories in order to be successfully transferred into a robot body and reunite with his beloved wife, Michelle.

With a high concept of "The Eternal Sunshine of the Spotless Mind meets Monkey Island in virtual reality", Loading Human is the evolution of the classic 'point 'n click' adventure videogame, utilising the recent advancements in VR technology to provide an unprecedented level of immersion. Untold Games has released a gameplay trailer that demonstrates how Loading Human revolutionises the adventure game genre using the latest VR and motion sensor controllers.

Loading Human has been developed to support the latest VR technology like the forthcoming Oculus Rift™ headset, and motion-based controllers like Sixense STEM™ and Razer Hydra™, which will simulate the player's hand movements. The player will naturally interact with the world: pick-up objects, open them or use them just like they would in real life. Whilst experiencing Loading Human, players will hear André's thoughts, control his body with their own, and live his life while the story unravels itself around them.

The original idea for Loading Human came from Italian actor and filmmaker Flavio Parenti (I Am Love, Le Ombre Rosse, and Woody Allen's To Rome With Love), who became fascinated by Oculus Rift™ and the latest motion-control technology, seeing their potential to provide new levels of interactive immersion for a wider gaming audience. Parenti collaborated with Untold Games and a screenwriter colleague to evolve the Loading Human concept into the game revealed today.

"The advances in VR and motion-sensor technology have allowed us to create a new level of immersion with Loading Human, and we are excited to provide a glimpse of what awaits players when they experience life through André Gibson's eyes, hands and movements."

Loading Human will be released for Windows and Mac OS later this year. As well as the Oculus Rift™ headset, Loading Human will also be playable with a standard monitor and a supported motion-based controller.
In this article: loading-human, mac, oculus-rift, pc, untold-games
All products recommended by Engadget are selected by our editorial team, independent of our parent company. Some of our stories include affiliate links. If you buy something through one of these links, we may earn an affiliate commission.