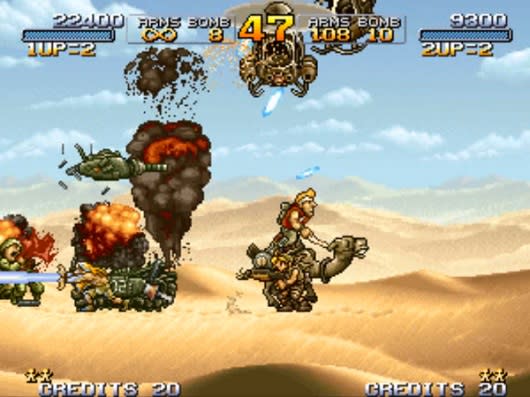 SNK's run-and-gun action game Metal Slug 3 will launch on Steam in February. The arcade game first arrived in 2000, later leaping to multiple platforms like XBLA in early 2008, the Wii Virtual Console in May 2012 as well as iOS and Android in 2012. The Steam version will feature online cooperative multiplayer, leaderboards and cloud save support.

In addition to the mobile ports, the Steam version was handled by DotEmu, a specialist in retro game adaptations. The developer previously brought the Double Dragon Trilogy to mobile and also took Another World to Mac, iOS and Android. DotEmu is currently hosting a closed beta for Metal Slug 3 on Steam.
In this article: action, coop, cooperative, dotemu, metal-slug-3, pc, port, release-date, run-and-gun, Side-scroller, snk, snk-playmore
All products recommended by Engadget are selected by our editorial team, independent of our parent company. Some of our stories include affiliate links. If you buy something through one of these links, we may earn an affiliate commission.