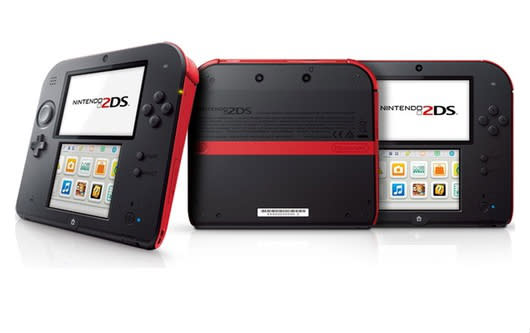 The Nintendo 2DS has made it into the tiny hands of 2.1 million customers worldwide since its launch on October 12, according to Nintendo's financial highlights (PDF link). The 3DS, which launched in February 2011, has shipped 42.7 million units, while the DS family has shipped 154 million units in total.

Nintendo has sold 7.38 million copies of Animal Crossing: New Leaf worldwide since its initial Japan release in November 2012. New Leaf launched in North America, Europe and Australia in June 2013: From April 2013 to December 2013, the game sold 2.79 million units outside of Japan, and 730,000 copies in the country.

Nintendo posted a year-over-year net profit decline of 30 percent in the nine months leading to December 2013, with numbers dragged down by weaker-than-expected Wii U sales and console price cuts. Nintendo CEO Satoru Iwata and board members are taking smaller salaries for a temporary period, French news outlet AFP reported.
In this article: 2ds, 3ds, animal-crossing-3ds, animal-crossing-new-leaf, ds, nintendo
All products recommended by Engadget are selected by our editorial team, independent of our parent company. Some of our stories include affiliate links. If you buy something through one of these links, we may earn an affiliate commission.