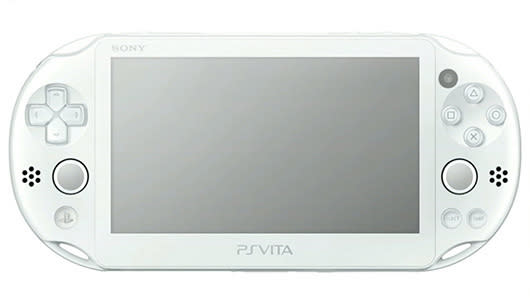 Though the screen in the Vita Slim is LCD, it will not feature a drastic decline in picture quality from the undeniably rich and vibrant OLED screen found in the original Vita, according to Sony UK managing director Fergal Gara.

"When we introduced Vita with the OLED screen that was considered - and it was - the pinnacle of screen technology," Gara told VG247. "It was a beautiful screen and LCD at the time would have felt like a compromise."

"What's happened in the interim is LCD screen technology has improved significantly," he added. "Whilst some think there's a subtle difference between the two, we think it's relatively imperceptible." Gara then goes on to explain that the new LCD screen allows Sony to build a smaller, lighter Vita while maintaining its processing power and battery life - a feat not possible with the attractive, but more power-hungry OLED display.

Gara echoed these sentiments in an interview with Eurogamer. "[The LCD screen is] giving bigger advantages than disadvantages - it's helping with the battery life, with the thickness. We think they are bigger wins than any subtle - if any - reduction in visual quality."

As we reported earlier today, the Vita Slim is slated for release in the UK on February 7. The updated handheld has been available in Japan since October, but there is no word yet on when or if it will make its way to North America.
In this article: fergal-gara, pch-2000, playstation, playstation-vita, psvita-slim, sony, uk, vita, vita-pch-2000, vita-slim
All products recommended by Engadget are selected by our editorial team, independent of our parent company. Some of our stories include affiliate links. If you buy something through one of these links, we may earn an affiliate commission.