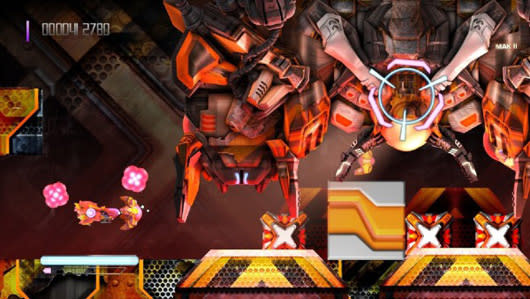 Crowdfunded arcade-style shoot-'em-up Redux: Dark Matters could follow up on its recent Sega Dreamcast launch with an appearance on the Wii U and 3DS eShops, developer René Hellwig told Nintendo Life this week.

"Since we developed the game on PC with HD graphics it will be easy for us to port the game to Nintendo consoles," Hellwig explained. "Nintendo is more straightforward with Indie devs, and we believe that in the coming years Nintendo consoles will be a great place to publish Indie games."

Redux: Dark Matters is slated to hit Steam and iOS devices this year. Fellow Dreamcast devotee developer NG.DEV.TEAM turned to Indiegogo to drum up support for 3DS and Wii U ports of its run-and-gun platformer Gunlord last year, but failed to meet its funding goal.
In this article: 3ds, dreamcast, indie, kickstarter, nintendo, redux-dark-matters, wii-u
All products recommended by Engadget are selected by our editorial team, independent of our parent company. Some of our stories include affiliate links. If you buy something through one of these links, we may earn an affiliate commission.