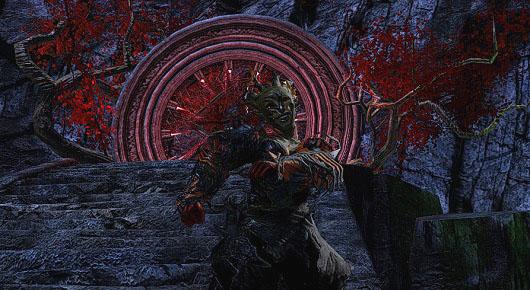 Regular readers of this column may have noticed that I spend very little time discussing Guild Wars 2's PvP scene. Some of you may have even jumped to the conclusion that this is because I suck at PvP and my only reason for even entering the Mists-based sPvP lobby is to try on clothes in the locker, so I'm here today to set the record straight: You are absolutely correct.

I do enjoy World vs. World, both in spite of and because I am terrible at traditional team-based PvP activities -- unless you count some special event minigames, which I am inexplicably OK at. On the whole, ArenaNet has done a pretty good job in GW2 at giving someone who has no business trying to poke fancy cutlery at other players avenues through which to do it anyway without bringing the whole structure crashing down.

Portrait of the artist as a noob

I first started wading cautiously into the shallow end of the PvP pool when World of Warcraft added Lake Wintergrasp with the Wrath of the Lich King expansion. Prior to that, my PvP experience had consisted of routing the occasional Alliance NPC-killer and lowbie-harasser in Durotar or the Barrens, and even then, just the sight of any max-level character in endgame gear was usually enough to send them fleeing. PvP duels were considered the honorable method for settling physical disputes between characters on my particular PvE roleplaying server, and knowing that any fights I started probably wouldn't end well for me actually helped with characterization: In a Horde rife with chest-beating and violent infighting, I ended up playing a cautious diplomat who managed to avoid writing any in-character checks my out-of-character skills couldn't cash. Wintergrasp's open world PvP mini-zone was surprisingly easy for a total carebear like yours truly to stumble into and play in, though; my attitude toward it went from being positive that I'd probably never touch it at announcement to fishing, gathering, and battling there nearly every day toward the end of WotLK's lifespan.

GW2's World vs. World has a lot in common with Lake Wintergrasp and is similarly easy to participate in for someone who is mostly innocent of the horrors of fake war. All of the elements I've heard some hardcore PvPers complain about in WvW -- PvE objectives, large-scale group battles, and lack of identifying nameplates for the enemy team -- are invaluable for raising the comfort level of people who might not otherwise be willing to brave the unknown. Essentially, it allows us to slip in under the radar and learn by doing without drawing attention to our inexperience or causing serious problems as the weak link in a group. This is a great way to learn whether or not you like PvP itself without having to separate it from the "learn to play, scrub" hazing that tends to commonly accompany the learning process.

During the recent EotM Q&A with Devon Carver, I mentioned in passing that I was a casual WvW player who hadn't touched it in several months due to queues. He replied that my experience was not unusual. My home server of Tarnished Coast is highly populated and a strong WvW contender, so queues are a major problem for us, whereas a server with lower population (or less WvW interest) might see queues rarely or never. As ArenaNet has mentioned in the past, though, resolving queues on populated servers is a high priority simply because every improvement the WvW team makes to the game mode increases its popularity. To make changes that will populate WvW further, the team needs to make sure the mode has room to grow.

Ideally, that's where Edge of the Mists comes in. By giving high-population servers some breathing space and turning the area into a public testing ground for new improvements, the team hopes to eventually help even out population issues on both ends of the spectrum. Are the Aetherblades automatically on the Red team? This is important

I'm not sure whether to be optimistic about the possible results of putting living world content in EotM. While it might seem a little odd to be worried about that when I was just talking about the need to get fresh blood into WvW, I also think there's a vast difference between providing low-pressure ways for the curious to explore PvP at their own pace and expecting pure PvE players to wade in just to experience the story and interact with NPCs -- stuff that's arguably PvE content.

GW2 players can get a little itchy over achievements, and while it's good to have achievements that reward a variety of gameplay activities, unwilling crossover between PvE and PvP has never -- in my admittedly limited experience -- turned out especially well in our corner of the MMO galaxy. There have been complaints about needing WvW badges for Legendary weapons, about PvEers getting farmed in Obsidian Sanctum while they run it for the chest, and about WvW season one achievement points. This usually prompts a response from WvW fans that if they don't enjoy being there, they ought to pound sand and let someone who wants to play WvW take their slot. If pure PvE players end up resentful that they have to struggle through a PvP map to get part of the story and achievements wrapped up, and WvW players end up resenting the presence of a bunch of temporary PvE elements and PvE players who don't actually want to fight, it could mean a worse public impression of the map overall. Of course, it could be that we'll all end up having a blast alongside each other with no lasting ill will, but I'm not going to hold my breath for too long; there are a lot of PvE players who simply don't want to PvP at all. They don't find it fun or exciting or anything but stressful, and they view attempts to gently nudge them into it with the same sense of deep betrayal a dog experiences when he thinks you're going to the park and you pull up to the vet's office.

On the WvWers' side, there's a brand-new map for their favorite game mode that won't be available to experience in its natural state for at least two weeks. While the ability to always get into an overflow copy of EotM when you want to play it is one of the selling points of the map, one issue with overflow servers -- which has become more apparent as time marches on -- is that they make it easier to play the game, but not much easier to play on your own home server with your friends. Zones cap very quickly, and it can be a pain to get even a small group of people together in the same overflow for a popular event. Playing EotM with guildmates, favorite commanders, or anyone other than strangers might be difficult for a while as everyone piles in to complete the living world meta achievements.

Even if I'm worried about the first two weeks of EotM potentially being marred by nonstop frustrated blame-slinging in chat, there's still a lot about the map that I'm looking forward to. The main draw for me is the environments, since I'm a big ol' fan of floating sky doodads and multi-tiered, vertical map building. With any luck, testing in EotM will cause the Mists to shift eventually and add a bit more visual sparkle to Eternal Battlegrounds and the Borderlands.

Sometimes I wonder about devourers. They look like scorpions but appear to have roughly the intelligence and personality of dogs. I've known a few scorpions in my time, and they didn't do a lot of trilling or getting up to adorable mischief; most of their hilarious antics were actually discovered when I shook out my shoe and realized we were both one thoughtless lacing-up from being in a world of hurt. Oh scorpions, you rascally scamps!

Are you a big WvW player, or is this release more like Edge of the Meh for you? Did you manage to get into the EotM beta? What are you looking forward to most about the new update? Let us know in the comments, and I'll see you in the Edge of the Mists!

Anatoli Ingram suffers from severe altitis, Necromancitosis, and Guild Wars 2 addiction. The only known treatment is writing Massively's weekly Flameseeker Chronicles column, which is published every Tuesday. His conditions are contagious, so contact him safely at anatoli@massively.com. Equip cleansing skills -- just in case.
In this article: anet, arenanet, buy-to-play, edge-of-the-mists, fantasy, featured, flameseeker-chronicles, frostbite, guild-wars, guild-wars-2, gw, gw1, gw2, living-world, ncsoft, opinion, player-vs-player, pvp, world-vs-world, wvw
All products recommended by Engadget are selected by our editorial team, independent of our parent company. Some of our stories include affiliate links. If you buy something through one of these links, we may earn an affiliate commission.