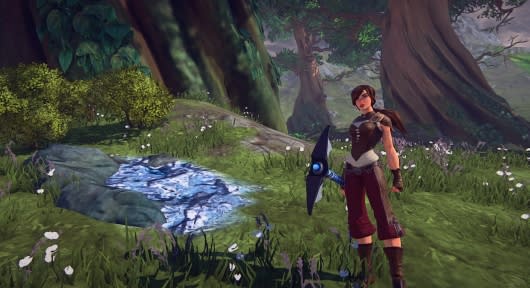 As our Week in Review on Sunday showed, Sony Online Entertainment and ZeniMax Online couldn't be treating their individual NDAs more differently. The Elder Scrolls Online still has an NDA firmly in place despite the fact that launch is a mere 60 days away, whilst EverQuest Next Landmark has already abolished the NDA despite still being in obvious stated alpha. Finding two more extreme examples operating at the same time would be nigh-on impossible. The question is which one is right.

On the one hand, lifting the NDA earlier implies a great deal of confidence in the game being developed. It's hard to look at a long-running NDA and think that the company behind the game is sure people will like the game on release. But on the other hand, letting people talk freely about a game can lead to no mysteries left on release, which might drive some people away and lead to overload for others. What do you think? How soon should a game lift its testing NDA?

Every morning, the Massively bloggers probe the minds of their readers with deep, thought-provoking questions about that most serious of topics: massively online gaming. We crave your opinions, so grab your caffeinated beverage of choice and chime in on today's Daily Grind!
In this article: alpha, beta, beta-testing, confidence, daily-grind, mmo-industry, nda, ndas, non-disclosure-agreements, opinion, previews, silence, tdg, test, test-agreements, testing-agreements, the-daily-grind
All products recommended by Engadget are selected by our editorial team, independent of our parent company. Some of our stories include affiliate links. If you buy something through one of these links, we may earn an affiliate commission.