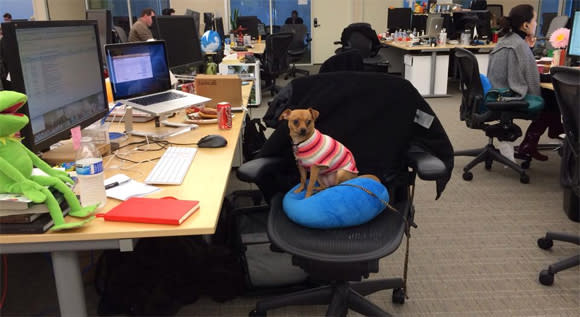 Well, technically you can bring your dog to work every day at my office. But yesterday I brought Miga. She was so productive I ended up getting replaced by her, as you can see above.

How likely do you guys think it is that Blizzard will ever allow us more frredom with our character names? For example, I really want to be able to use apostrophes in my characters names, especially Orc and Troll characters and it does make me feel less connected to those characters because their neames aren't right.

This is something I've always wanted. In beta, the first character I ever rolled I named Ciel Larkin, but the naming thing truncated it to Ciellarkin. I was sad. It always seemed like a flavor miss to me, not being able to give yourself a real orc or human or troll name. Unfortunately, this seems like one of those things where if we haven't gotten it yet, we probably never will. Maybe in WoW2.

How did Farshire get it's name in Northrend? It's the closest settlement to Valliance keep. It's not far from anything ;)

Well, it's far from the Eastern Kingdoms (or Theramore), which is where the folks who sailed to Valgarde and set up shop came from. That would be my guess.

Do you think it would be feasible to allow the armor professions (blacksmithing, leatherworking, tailoring) to repair their respective armor type? Not necessarily for free, but cheaper than the other repair options?

Other MMOs have this feature in bits and pieces, usually through some kind of crafted tool that can be sold/traded. It'd be nice to have during raids and not have to worry about someone having a repair bot. But Blizzard does seem to want us in towns for that stuff.

I can't get a Plate Belt on the Timeless Island. I though each chest dropped a specific slot. Am I doing something wrong?

It's all random, unfortunately. I've spent forever on that damn island on five characters and there are slots I still haven't filled (cloth shouldeeeerrrrs!!). Meanwhile, I have 40 Timeless Plate Bracers. Life is hell.

1) Can you talk a little bit about your NPC in Old HIllsbrad? Did you lobby to have it there or was it a surprise, did you have any input on it, etc.

2) How do you have so much time to play other games? I am jealous.

3) Not so much a question, but congratulations on being engaged! I realize it's a month or so past, but hey, it's the thought that counts, right.

1) I had a friend on the world design team who'd often work late during WotLK crunch, and my 6 PM to 3 AM shift on the CS Forum meant our shifts overlapped a bit. We talked on MSN Messenger a lot (she was in Irvine, I was in Texas) to keep ourselves sane. One night she was giving all the Old Hillsbrad NPCs names and offered to name one after me (and give it my fabulous then-long hair). It was very kind of her. There are a number of other NPCs in the area with names that reference folks who were on the CS Forum team at the time.

2) My secret is this: I only play games when I'm having fun with them. This includes WoW. If I'm bored, or not having fun, I stop playing them. With WoW, this usually means breaks of a few weeks to a few months, then I come back and have a grand old time. Until I don't anymore. So if you mean "how do you find time to play WoW and other games at the same time": I don't! Not usually, anyway.

3) Thank you! Caitlin and I are very happy and excited.

A few weeks ago you gave into the bigots and trolls on an LGBT article by shutting down the comments to give those horrible people what they wanted. It has bothered me ever since that WoW Insider would give those mentally ill people what they want instead of fighting back and banning those pieces trash. Is WoW Insider now going to abandon posting all LGBT related WoW news from now on?

Definitely not. We shut down commenting when moderation becomes too difficult, as is sometimes the case with articles like the one you're referring to and the Swifty controversy. We have every intention of continuing to support and publicize WoW players and communities of all stripes. We just may decide to do so in a way that doesn't allow bigots a soapbox to stand on, which comments usually do, at our discretion. We may also employ commenting bans, as we've done in the past. Last thing: I respect your passion, but I'd caution against calling others "mentally ill" as an insult, even if they disagree with you on an issue you consider important. Not a good look.