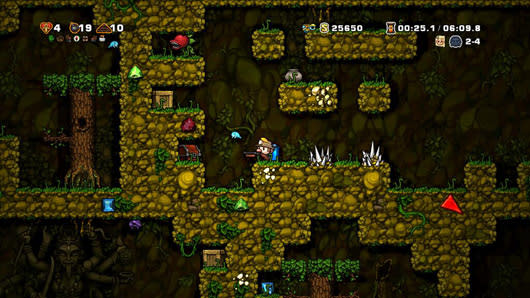 Spelunky's latest update introduces an optional "Pro" HUD that obscures less of the screen than the default interface, aiding players in crowded levels. The update additionally offers an "invert run" option, which makes running the default movement speed. When this option is enabled, players will need to hold the game's run button to walk instead of run.

Version 1.4 of Spelunky also adds a backup save option and fixes repeating seed issues within the Daily Challenge mode. The changelog reports many more fixes for long-standing bugs: A ghost will no longer kill players instantly when they enter Olmec's chamber after destroying several Kali altars, for instance.

The latest update is currently exclusive to the Steam version of Spelunky. An update for the GOG.com edition is coming soon.
[Image: Mossmouth]
In this article: indie, mossmouth, pc, spelunky, steam, update
All products recommended by Engadget are selected by our editorial team, independent of our parent company. Some of our stories include affiliate links. If you buy something through one of these links, we may earn an affiliate commission.