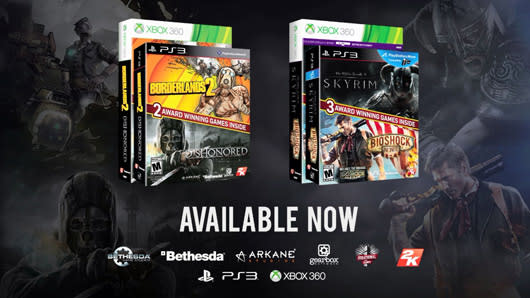 Bethesda has launched a pair of multiplatform retail bundles collecting many of its best-reviewed games from recent years, including BioShock Infinite, Borderlands 2, and The Elder Scrolls 5: Skyrim.

NEW YORK--(BUSINESS WIRE)--2K and Bethesda Softworks® today announced that four of the most critically-acclaimed video games of their generation – The Elder Scrolls® V: Skyrim, BioShock® Infinite, Borderlands® 2, and Dishonored™ – are now available in two all-new bundles* for $29.99 each in North America on the Xbox 360 games and entertainment system from Microsoft, PlayStation®3 computer entertainment system, and Windows PC.

"Not only have these games been critical successes, but they have also won the hearts of gamers everywhere"

Critics agree that Skyrim, BioShock Infinite, Borderlands 2, and Dishonored are four of the most celebrated and influential games of all time.

Skyrim garnered more than 50 perfect review scores and more than 200 awards on its way to a 94 overall rating**, earning praise from some of the industry's most influential and respected critics.

BioShock Infinite has earned a 94 overall rating** and more than 120 awards to date, including the Associated Press' unanimous Game of the Year, on its way to becoming the highest-rated first-person shooter of 2013**.

Borderlands 2 and its industry-leading downloadable content has earned more than 60 awards to date, a 90 overall rating**, and was described by Game Informer as "one of the most rewarding gaming experiences of this console generation."

Dishonored earned more than 100 awards from outlets including Game Informer, PC Gamer, Yahoo!, GameSpot.com, MSNBC.com, and CNN on its way to an 89 overall rating**.
"When you think of the best games of the modern era, you think of Skyrim, BioShock Infinite, Borderlands 2, and Dishonored," said Christoph Hartmann, president of 2K. "Combined, these four instant classics have sold tens of millions of copies worldwide, and have been recognized by hundreds of critics as the best in the industry, and now 2K and Bethesda Softworks are offering these games at an incredible value."

"Not only have these games been critical successes, but they have also won the hearts of gamers everywhere," added Vlatko Andonov, President, Bethesda Softworks. "Each of these games has an extraordinarily passionate fan base and we look forward to seeing those grow even larger as more people get to explore these fully-realized worlds."

*Bundles include the base games; downloadable content can be purchased separately.

**Based on Metacritic.com scores as of January 27, 2014 across all available platforms.

Headquartered in New York City, Take-Two Interactive Software, Inc. is a leading developer, marketer and publisher of interactive entertainment for consumers around the globe. The Company develops and publishes products through its two wholly-owned labels Rockstar Games and 2K. Our products are designed for console systems, handheld gaming systems and personal computers, including smartphones and tablets, and are delivered through physical retail, digital download, online platforms and cloud streaming services. The Company's common stock is publicly traded on NASDAQ under the symbol TTWO. For more corporate and product information please visit our website at http://www.take2games.com.

Gearbox Software is respected industry wide for the award winning, best-selling original and licensed video games they have developed for major video game platforms. Founded in 1999 and located near Dallas, TX, Gearbox Software is well known for the creation, development and management of its original blockbuster video game franchises including the best-selling new property of 2009, Borderlands, and its record setting downloadable content, the critically acclaimed award winning Brothers in Arms series, and the Duke Nukem and Homeworld franchises. The company has also developed licensed video games for many of the industry's top franchises including Halo, Half-Life, Tony Hawk's Pro Skater, 007 James Bond, Aliens and others. Gearbox Software's success has been enabled and supported through several key mutually beneficial business relationships with strong publishing partners including Activision, Electronic Arts, Ubisoft Entertainment, Microsoft Games Studios, Sega, and Take-Two/2K Games.

Located near Boston, Massachusetts, Irrational Games is widely recognized as one of the industry's leading game developers. Irrational has earned a reputation for creating story-driven, genre-defining games with award-winning hits like System Shock 2, Freedom Force, the original BioShock, and BioShock Infinite. For more information, visit http://www.irrationalgames.com.

Bethesda Softworks, part of the ZeniMax Media Inc. family of companies, is a worldwide publisher of interactive entertainment software. Titles featured under the Bethesda label include such blockbuster franchises as The Elder Scrolls®, DOOM®, QUAKE®, Fallout®, Wolfenstein®, Dishonored®, Prey® and RAGE®. For more information on Bethesda Softworks' products, visit http://www.bethsoft.com.

Arkane Studios, a ZeniMax Media company with offices in Lyon, France and Austin, Texas, was founded in 1999 and has earned an enviable reputation for creating distinctive games. Their most recent release, the innovated first-person action game Dishonored, has received worldwide critical-acclaim, winning over 50 awards at the 2012 Electronic Entertainment Expo (E3) as well as GamesCom's "Game of the Show". Since its release in October 2012, Dishonored has received over 100 'Game of the Year' and 'Action/Adventure Game of the Year' awards from the industry's most influential media outlets.

All trademarks and copyrights contained herein are the property of their respective holders.
In this article: 2k-games, arkane-studios, bioshock, bioshock-infinite, borderlands-2, bundle, compilation, dishonored, irrational-games, microsoft, pc, playstation, ps3, the-elder-scrolls-v-skyrim, xbox
All products recommended by Engadget are selected by our editorial team, independent of our parent company. Some of our stories include affiliate links. If you buy something through one of these links, we may earn an affiliate commission.