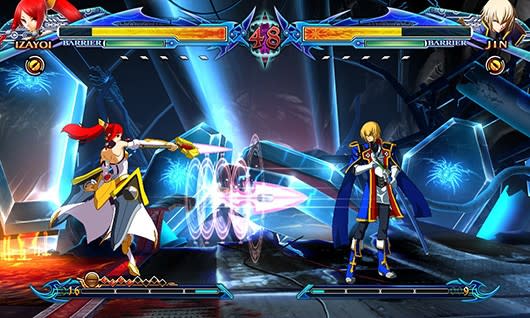 BlazBlue: Chrono Phantasma on PS Vita will ship with an additional side-story revolving around a beach party, an "enhanced" Abyss mode - BlazBlue's procession of progressively more difficult opponents - and an abridged story catch-up for all PS Vita players new to the series. Unfortunately, the exact way in which Abyss is "enhanced" is not mentioned in the press release past the break.

About BlazBlue: Chrono Phantasma for the PlayStation®Vita system

With the Cauldron shattered and the cycle broken, Ragna begins his final mission: Hunt down the villainous Terumi. Noel's life and the fate of the entire world hang in the balance as Ragna the Bloodedge marches toward one last confrontation.

Ragna Begins His Final Mission – BlazBlue: Chrono Phantasma's story mode contains more than 30 hours of gameplay, delving further into the epic journey of Ragna and the others than ever before. The PlayStation®Vita system version contains a summary that takes you back to the events of Calamity Trigger and Continuum Shift to help refresh your memory!

Additional Story Content – Ever wonder what Noel, Ragna and new characters Celicia and Kagura would do if they hung out at a beach? Wonder no more because BlazBlue: Chrono Phantasma for the PlayStation®Vita system offers just that: a completely new story featuring your favorite characters at the beach! Did we mention bathing suits?

BlazBlue: Chrono Phantasma has not yet been rated by the Entertainment Software Ratings Board (ESRB). For more information, visit www.esrb.org.
In this article: aksys, blazblue-chrono-phantasma, playstation, playstation-vita, vita
All products recommended by Engadget are selected by our editorial team, independent of our parent company. Some of our stories include affiliate links. If you buy something through one of these links, we may earn an affiliate commission.