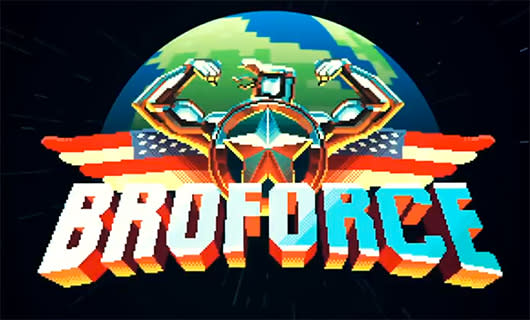 "When evil threatens the world, the world calls on Broforce - an under-funded, over-powered paramilitary organization dealing exclusively in excessive force," reads the game's official description. "Brace your loins with up to four players to run 'n' gun as dozens of different bros and eliminate the opposing terrorist forces that threaten our way of life. Unleash scores of unique weapons and set off incredible chain reactions of fire, napalm, and limbs in the name of freedom."

If that last paragraph didn't grow hair on your chest, take a look at the above trailer, which depicts Broforce as a retro-styled, multiplayer platformer homage to the action films of the 1980s. You've got your classic action hero archetypes, your over-the-top machismo, and an eagle made of metal flexing in front of the American flag. Short of Sylvester Stallone arm-wrestling the ghost of Ronald Reagan, this is about as bro as it gets, bro.
[Image: Devolver Digital/Free Lives]
Show full PR text
DEVOLVER DIGITAL AND FREE LIVES BECOME BEST BROS FOR BROFORCE

- Available Wherever Bros Are Sold -


Capetown, South Africa- 11th February, 2014 – In what industry pundits are calling the most obvious pairing ever, developer Free Lives and rogue publisher Devolver Digital are joining forces to bring Broforce to Steam Early Access in March 2014 with a full PC and console release this summer. Born during Ludum Dare 23, Broforce has been through an extended training montage over the past year and is now poised to dominate international politics and possibly end terrorism through a sheer show of force.

Broforce brings the shock and awe as gamers across the globe take control of an under-funded, over-powered paramilitary organization dealing exclusively in excessive force. Stroke your MURDER-BONER™ with up to four friends, locally and online, in non-stop, explosive run 'n' gun action and eliminate the terrorist forces that threaten our way of life. Adapt your tactics as you select bros from a massive roster of true 80's and 90s action heroes, each with unique weapons and abilities. Set off incredible chain reactions of fire, napalm and limbs in the name of freedom. Then, as the dust settles, face off against each other in one of many competitive modes. Finally gain closure by answering important life questions that have been keeping you up at night: who would win in a flex-off between the Brominator and Brobocop?


"Broforce is sure to put hair on your chest, regardless of gender, and give your neck that thick, tree stump look that is coveted by all true bros," said Devolver Digital CFO Fork Parker. "Hnnnnnng."

In addition to the campaign and multiplayer modes in Broforce, more creative bros will be able to use the level editor to create and share their own custom playgrounds of destruction just to watch their friends tear it apart in the name of freedom and democracy.

"We're elated to find a publisher with enough luscious chest hair and neck girth to match up with Broforce," said Evan Greenwood, Director at Free Lives.


Follow development of Broforce via freelives.net or on Twitter @Free_Lives if you think you can handle the intensity, bro.
In this article: bro, broforce, devolver-digital, early-access, free-lives, pc, steam, steam-early-access, valve
All products recommended by Engadget are selected by our editorial team, independent of our parent company. Some of our stories include affiliate links. If you buy something through one of these links, we may earn an affiliate commission.