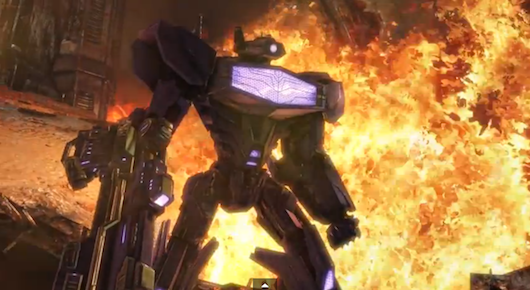 After an early listing popped up on Amazon UK, as reported by Polygon, Transformers: Rise of the Dark Spark was revealed today during Hasbro's presentation at the NYC Toy Fair. IGN has posted the above trailer, which was reportedly shown during the presentation. The ending title screen notes that Dark Spark will reach PS3, PS4, Xbox One, Xbox 360, Wii U, 3DS and PC.

Update: According to a report from Examiner, Dark Spark will be handled by Loadout developer Edge of Reality rather than High Moon Studios, which worked on Transformers: War for Cybertron, Transformers: Dark of the Moon and Transformers: Fall of Cybertron. The report also states that Ducktales: Remastered developer WayForward will handle a "strategy RPG" version of Dark Spark for the 3DS.

Examiner's report notes that Dark Spark will merge the "[Transformers] Cybertron universe and the Michael Bay Transformers universe." It also states that the single-player campaign will let players side with the Autobots or Decepticons, while the multiplayer Extinction mode will feature combat built around hordes. Experience earned in either mode is said to transfer over to the other, allowing a player's progression to follow them throughout the game.
[Image: IGN]
[Thanks, CJMErl!]
In this article: 3ds, activision, hasbro-games, microsoft, nintendo, pc, playstation, ps3, ps4, transformers, transformers-rise-of-the-dark-spark, xbox, xbox-one
All products recommended by Engadget are selected by our editorial team, independent of our parent company. Some of our stories include affiliate links. If you buy something through one of these links, we may earn an affiliate commission.