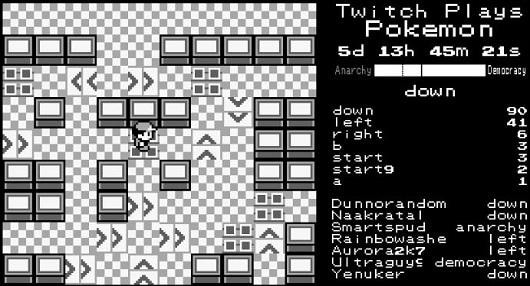 Last week, the chat-controlled Twitch Plays Pokemon grabbed our attention, as ten thousand people were able to simultaneously control the lead character in Pokemon Red/Blue. In the near five and a half days of the stream's existence, it's crossed 75,000 concurrent viewers, though Twitch says that the number of unique visitors to the chaotic game tallies over 300,000.

Given the madness of Twitch Plays Pokemon, the stream's creator implemented a new system for the crowd-controlled game: a democratic voting system. Now, those that type commands are essentially casting their vote for the next action in the game, which goes into effect after a couple seconds. It also allows voters to add a number after their desired command to indicate how many times the action should be performed, such as "right3" being used to tell our hero to go right three times.

As expected, not everyone is on board with the new voting system, so the command "start9" is gaining traction to stall the game's progress. That's why the creator also added another voting system, allowing viewers to push a meter to either "anarchy" or "democracy," presumably to decide the future format of the game.

Twitch Plays Pokemon has also amassed plenty of extra attention in the form of its own observational Twitter account, Subreddit and even public Google Doc status tracker. Among the noteworthy activities on the stream since last week, the community opted to throw away two Moon Stones and its starter Pokemon Charmeleon, relied heavily on its "Bird Jesus" Pidgeot and has earned four badges in the game.
[Image: Twitch Plays Pokemon]
In this article: anarchy, ash, charmeleon, community, democracy, LiveStream, pokemon, pokemon-blue, pokemon-red, stream, twitch, twitch-plays-pokemon, voting
All products recommended by Engadget are selected by our editorial team, independent of our parent company. Some of our stories include affiliate links. If you buy something through one of these links, we may earn an affiliate commission.