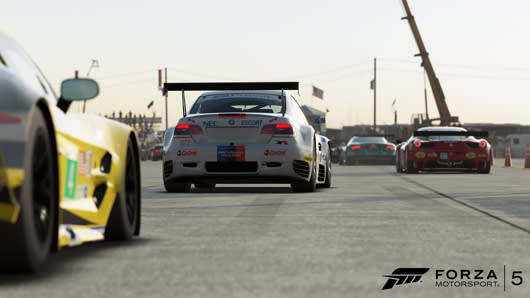 A new Microsoft press release suggests Forza 5 is an Xbox One million-seller (rather than a million-shipper). According to the big M, more than a third of Xbox One owners purchased Turn 10's racer, and we already know the Xbox One notched 3 million sales by the close of 2013. When we input all that in to the Joystiq Supercomputer 6000, it beeps and whirs that Forza 5 sold at least a million units. So why didn't Microsoft just say that?

We stress "at least," because Microsoft stipulates its info is based on February 2014 sales data, and that hasn't been released yet. So the number of Xbox One sales should be a fair bit greater now, and in turn the third of owners who bought Forza 5. We'll have to wait for less cryptic press releases to confirm any of that, though.

The news revs in alongside new DLC for the game, including the free Road America pack that adds themed events to the Career and Rivals modes. Owners of the game's Car Pass are also getting a new five-car Road America selection, supplementary to the previously announced six monthly packs.
In this article: forza-motorsport-5, microsoft, Microsoft-Game-Studios, turn-10, turn-10-studios, xbox-one
All products recommended by Engadget are selected by our editorial team, independent of our parent company. Some of our stories include affiliate links. If you buy something through one of these links, we may earn an affiliate commission.