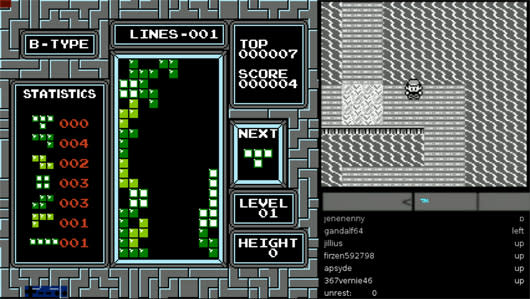 The tens of thousands of Twitch members who are participating in a crowd-sourced playthrough of Pokemon Red are also unknowingly taking part in an ongoing game of Tetris. Twitch Plays Pokemon Plays Tetris captures input requests from the Twitch Plays Pokemon chat and repurposes them for the strangest, lowest-scoring game of Tetris you've likely seen.

Curated by Xkeeper, Twitch Plays Pokemon Plays Tetris features a modified version of Nintendo's 8-bit Tetris that gives players greater control over tetrimino placement...in theory. The mod adds a feature that sends falling pieces toward the top of the screen every time an "up" input is registered, adding to the chaos.

It's a very deliberately paced game of Tetris, in other words. Scores are low and completed lines are rare, but possible. Other Twitch Plays Pokemon-inspired bits of madness that have cropped up over the last week include Twitch Plays QWOP and RNG Plays Pokemon, which uses a random number generator to decide input.

[Image: Nintendo/Twitch]
In this article: pc, pokemon, tetris, twitch, twitch-plays-pokemon
All products recommended by Engadget are selected by our editorial team, independent of our parent company. Some of our stories include affiliate links. If you buy something through one of these links, we may earn an affiliate commission.