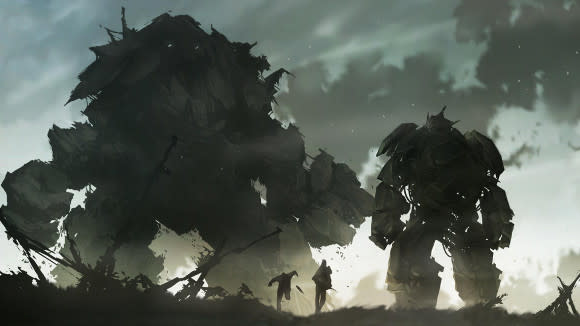 There's something about really big monsters, whether it be movies like Pacific Rim or the upcoming Godzilla remake, or giant world bosses like the Sha of Anger and behemoth raid baddies. With the interview Ion Hazzikostas did this week fresh in my mind, I'm looking forward to the Fomor. Three to four times taller than Gruul or other Gronn? Bring it on, Draenor.

I want to do some serious Shadow of the Colossus style back climbing here. It would be awesome if one group tanks and DPS's the fomor from the ground while another group ascends its back, fighting off monsters that live inside it to get to the head and deal the death blow.

Portalhopper asks:
Q4tQ: Having levelled another char post 5.4.7, it seems the most effective way to gear up at ninety is chain dungeons for JP, convert the JP to HP, then buy PvP gear to PvE with. Why didn't they just convert the 522 VP gear to JP?

The honor gear is still inferior to Siege of Orgrimmar LFR gear, so the thought was probably that if you have gemmed and enchanted Timeless Isle gear, you might as well stay with that until you get gear from LFR, Flex, or Burdens of Eternity (all of which is superior to the 522 PvP gear), and that letting people pick up PvP gear for JP at the higher cost was an acceptable compromise. I wish they'd done as you suggest, though, for my various 90 warrior alts. Might have to just go get my tauren a set of PvP gear.

PaulLloyd asks:
So....somewhat officially revealed 20% reduction to the number of abilities. Obviously I reserve judgement to see how many are just redistributed from Class Spells to Spec Spells (which means they remain in-game, just not for all), but does that number seem a bit excessive? Even the bloatiest of Classes didn't feel that bloated.

Keep in mind that we don't know which spells were combined - for instance, is Shattering Throw gone, or just merged with Heroic Throw? So until we know more, we're in a wait and see pattern, just holding on until we get more information.

Haibane asks:
I asked this question yesterday but no one answered. Over on the American and the European servers has the pet and mount bug been fixed? Cause here in China I'm still missing some pets and mounts.

I received all my missing mounts in the mail. So hopefully you will soon as well.

Malajin asks:
About how long can we expect our legendary cloaks to last into the next expansion, before being upgraded by a quest green or dungeon blue? It's my first legendary (as I imagine it is for many others), so I have no prior experience to draw from

I would not be surprised if it lasts until 95 or 96, if not further. Legendaries in previous expansions had to get nerfs to keep people from using them all the way to level cap and the proc on the legendary is ludicrously good - if they don't put in a scaling nerf that decreases how often it procs as we all level past 90, it could theoretically go till 100.

Will we look at the new expansion as our own or a foreign thing. I personally don't want to go as an Orc to this world to say well this world is great but its not mine. My world was destroyed.

It's a foreign world. Even if you're an orc or draenei who lived on Draenor before it became Outland, this Draenor is not that Draenor. Think of it like old school comics - your orc was born on Draenor 1. This is Draenor 2. Parallel timeline, not your past.

Will we use the term "is" or "was" for this place?

Is. This place is, not was. We're going to an alternate world that happens to be similar to our Draenor's past.

Is this a filler saga of "go kill it, nothing happens to us and then we return" or will there be major plot changes from our universe? Could this world for example become the Horde & Alliance's second home with people like Thrall settling there?

It's like this - on this Draenor, a hostile force (the Iron Horde) is working to build a Dark Portal and invade our Azeroth. We want to stop that from happening. If we succeed, presumably, Azeroth will remain unconquered by the Iron Horde, but clearly there's already some collusion between our world and theirs, because Blackrock Spire is being updated to fit into the Warlords of Draenor timeline - this means it's likely been invaded by the Iron Horde already and thus, Azeroth has already been changed.

But we don't know the details yet, so any guesses like "We'll end up moving to this Draenor' are just supposition. We'll find out more once the expansion gets rolling. Don't make the mistake people did dismissing Mists of Pandaria before it came out - let the story happen before you make up your mind about it.

And that's the Queue for today. See y'all tomorrow.