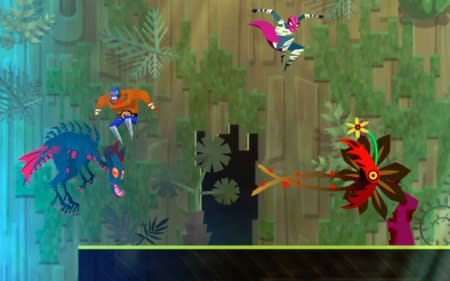 I love games that realize that they are games. What I mean by that is a game that isn't afraid to point out the fact that you are indeed doing something ridiculous, and is in on the joke. Guacamelee is one of those games, and everything from the level design to the ridiculous story seems to be made to put a smile on your face.

How crazy is the story? Try this one for size: You're an agave farmer who turns into luchador (a type of traditionally over-the-top Mexican wrestler) in order to rescue the president's daughter from a hellish skeleton overlord. You regularly switch dimensions from the living world to the land of the dead in order to solve puzzles and traverse the 2D landscape. It's bonkers, but brilliant.

The game is played like a traditional 2D platformer, where you'll be spending much of the game running left or right. And as the title suggests, your primary means of dispatching enemies is with hand-to-hand combat. The fighting is smooth and responsive, and avoids much of the "punch one enemy, get punched in the back by another" annoyance of similar titles. Enemies start off small, but will eventually fill the screen, requiring that you adjust your approach for each new enemy type.

You gain a whole host of abilities as you progress, many of which will be familiar to gamers who cut their teeth on titles like Metroid on the original Nintendo. Only in Guacamelee, you turn into a pint-sized chicken to sneak through narrow gaps, rather than rolling into a ball.

The game originally launched early last year for PlayStation systems, but the Gold Edition just launched for OS X on Steam. In addition to the full original game, the new release includes bonus costumes and new abilities, as well as Steam extras like trading cards.

There's a ton of replayability here, and with the addition of 2-player co-op, you may very well find yourself tackling the game multiple times just because it's so well done. If you've not yet given Guacamelee a go -- or if you're a PlayStation 3 or Vita gamer who feels like revisiting this gem -- it's available for US$14.99 via Steam.

In this article: app review, gaming, guacamelee, Mac, os x, steam
All products recommended by Engadget are selected by our editorial team, independent of our parent company. Some of our stories include affiliate links. If you buy something through one of these links, we may earn an affiliate commission.