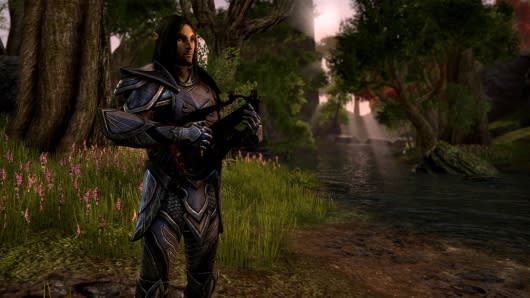 Music plays a major role in setting the mood of any game. Sure, it might not be what makes or breaks The Elder Scrolls Online, but it would be difficult to get into the feel of epic adventure if the game's soundtrack were played entirely on harmonicas and vuvuzuelas. The latest development blog on the official site explains how the game's music was developed, how it was recorded, and what you can expect from the experience.

Brad Derrick and Rik Schaffer handled the composition of the in-game score, experimenting with a variety of different methods for delivering the songs. At one point the game featured a system that changed the soundtrack measure by measure based on context cues, but that proved unworkable in the long run; instead, the music shifts to a variety of pieces depending on gameplay, weather, and the like, with unifying themes in each environment. Click on past the break for a sample of the orchestral recording, as well as one of the bardic songs performed by the singer Malukah.

In this article: bethesda, bethesda-softworks, bethsoft, composition, daggerfall, dev-blog, development-blog, elder-scrolls, elder-scrolls-online, eso, factions, morrowind, music, musical, news, news-items, oblivion, pvp, rvr, sandbox, skyrim, sound, tamriel, tes, teso, the-elder-scrolls, the-elder-scrolls-online, three-faction-pvp, three-way-pvp, video, videos, zenimax, zenimax-media, zenimax-online, zenimax-online-studios
All products recommended by Engadget are selected by our editorial team, independent of our parent company. Some of our stories include affiliate links. If you buy something through one of these links, we may earn an affiliate commission.