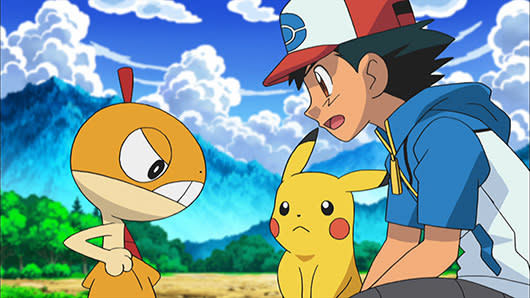 Like Hulu before it, streaming video giant Netflix is expanding its portfolio of films and TV shows to include a selection of animated Pokemon fare.

Come March 1, Pokemaniacs will find two movies and two seasons of the Pokemon animated series listed on Netflix. American Netflix subscribers will receive access to Pokemon: Indigo League (better known as the first season of the series), while Pokemon: Black & White will come available to everyone, regardless of location. To complement the global addition of Pokemon: Black & White, Netflix is also adding Pokemon the Movie: Black - Victini and Reshiram and Pokemon the Movie: White - Victini and Zekrom, two Pokemon films which made their US debut in 2012.

As with all Netflix offerings, these shows and movies are only available to Netflix streaming subscribers. If you don't have the scratch to afford $8 per month, we'd recommend you pay a visit to Pokemon TV. Nintendo and The Pokemon Company have generously set up the site as a repository where fans can stream many episodes of the animated series at no charge.
[Image: The Pokemon Company]
Show full PR text
POKÉMON ANIMATION WILL BE AVAILABLE TO STREAM TO MEMBERS IN ALL NETFLIX TERRITORIES STARTING MARCH 1st

WHAT: The fan-favorite Pokémon: Black & White season introduced a new region, new rivals, new challenges, and all-new Pokémon. Ash may have Pikachu by his side, but he will need plenty of new Pokémon on his team if he wants to challenge Unova's expert Gym Leaders. Pokémon: Black & White will be available in all Netflix territories. The first season of Pokémon animation, Pokémon: Indigo League, will also be available in the US, Canada, the United Kingdom, and Ireland. The classic season introduces viewers to the world of Pokémon through Ash and his partner Pikachu as Ash strives to become a Pokémon Master.

Pokémon fans in all Netflix territories can also catch Ash, Pikachu, and their friends in the dual movies Pokémon the Movie: Black-Victini and Reshiram and Pokémon the Movie: White-Victini and Zekrom. When Ash and his friends enter a battle competition in Eindoak Town, they meet the Mythical Pokémon Victini, who becomes their newest friend. But disaster strikes when the misguided wanderer Damon seizes Victini for his own plans! Can Ash prove himself a hero and earn the help of the Legendary Reshiram-or Zekrom-to rescue Victini and save Eindoak Town? Two legends...and two versions of the story!

WHERE: Netflix streaming services in the US, Canada, Latin America, the Nordics,
the United Kingdom, Ireland, and the Netherlands.


About Netflix
Netflix is the world's leading Internet television network with more than 44 million members in over 40 countries enjoying more than one billion hours of TV shows and movies per month, including original series. For one low monthly price, Netflix members can watch as much as they want, anytime, anywhere, on nearly any Internet-connected screen. Members can play, pause and resume watching, all without commercials or commitments.

About Pokémon
The Pokémon Company International, a subsidiary of The Pokémon Company in Japan, manages the property outside of Asia and is responsible for brand management, licensing, marketing, the Pokémon Trading Card Game, the animated TV series, home entertainment, and the official Pokémon website. Pokémon was launched in Japan in 1996 and today is one of the most popular children's entertainment properties in the world. For more information, visit www.pokemon.com.
In this article: netflix, nintendo, pokemon, pokemon-black-and-white, pokemon-the-indigo-league, pokemon-x-y, streaming, streaming-video, the-pokemon-company, tv
All products recommended by Engadget are selected by our editorial team, independent of our parent company. Some of our stories include affiliate links. If you buy something through one of these links, we may earn an affiliate commission.