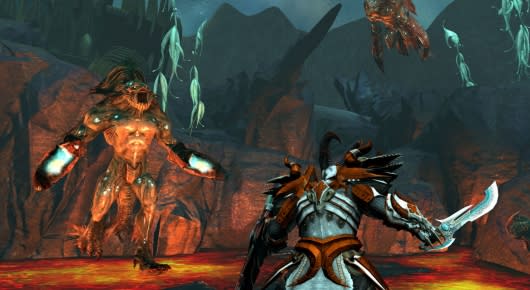 Official game forums have a reputation for being hopelessly toxic. It makes a certain amount of sense, too; being an utter jerk in the forums usually means that at worst you'll be banned from those forums. So RIFT is taking things up to the next level. If you choose to be persistently awful in the forums, you can eventually have your ability to play the game suspended. Readers with a long memory will note that Sony Online Entertainment has discussed similar possibilities in the past, hoping to encourage a more positive and engaging atmosphere all around.

The Carnival of the Ascended is rolling back into the game and helping create a more positive atmosphere as well, giving players a plethora of minigames to enjoy. RIFT Junkies has a full guide to the event available now, walking players through the steps necessary to unlock mounts, pets, and fun cosmetic pieces. So enjoy the addition... assuming you haven't run afoul of the more aggressive behavior policies.

[Thanks to Cederhill for the tip!]
In this article: behavior-policies, code-of-conduct, conduct, culture, events, f2p, fantasy, forum, forum-culture, forums, free-to-play, in-game-events, news, news-items, policies, pvp, rift, rift-lite, rift-planes-of-telara, rvr, special-events, three-faction-pvp, three-way-pvp, trion, trion-worlds
All products recommended by Engadget are selected by our editorial team, independent of our parent company. Some of our stories include affiliate links. If you buy something through one of these links, we may earn an affiliate commission.