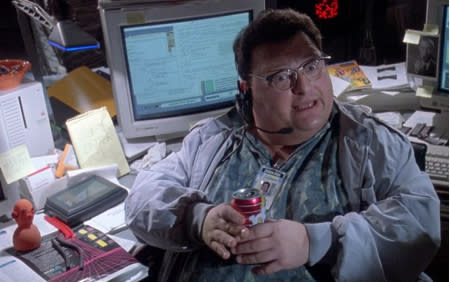 Following hot on the heels of the recent SSL connection update -- and in response to criticism that the company is too slow to fix critical software issues -- Apple today released an update to its vintage System 7 OS that corrects a crucial vulnerability which made it susceptible to attacks from portly hackers. The bug has long been held responsible for an incident in 1993 on the island of Isla Nublar in which the security systems of a clandestine zoo led to the release of several dangerous prehistoric creatures.

The zoo, called Jurassic Park, had its systems hacked by Dennis Nedry, a systems administrator at the park who exploited a lax security protocol in Apple's System 7. Nedry's attack, which was orchestrated using a Macintosh Quadra 700, led to a series of unfortunate incidents resulting in the deaths of several park employees and scientists.

An Apple spokesperson refused to confirm that today's software update was indeed a direct result of the Jurassic Park incident, saying only "There is no longer any reason to fear Whte_Rbt.obj."

Jeanie Clarence, a spokesperson with Jurassic Park's parent company InGen, welcomed the news. "It's great that Apple is finally shutting the door that Nedry opened," she said. "We cherish the memory of those we lost, except for that one lawyer guy. He was kind of creepy anyway."

In this article: funny, humor, jurassic park, parody, quadra 700
All products recommended by Engadget are selected by our editorial team, independent of our parent company. Some of our stories include affiliate links. If you buy something through one of these links, we may earn an affiliate commission.
Share
Tweet
Share