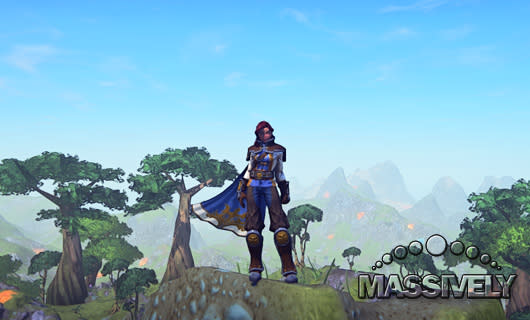 With free-to-play titles, you have to wonder how exactly the game will stay afloat monetarily. EverQuest Next Landmark's Director of Development, Dave Georgeson, took the guesswork out of figuring out what will be available for sale by revealing the five phases of the upcoming sandbox's proposed business strategy.

Players are already familiar with the first phase going on now, Founders Packs, and are expecting the advent of Player Studio, which is slated for early closed beta. The two phases in between, however, might be the most controversial; they involve selling character outfits, resources, and shortcut methods for features. Anticipating player concern, Georgeson explained that the current resource progression in alpha is not planned for the game proper; items will soon only need handfuls of resources to make tools. For feature shortcuts, he gives the example of paying upkeep, renting market stalls, or gaining the effects of a potion without physically crafting the potion first. The final phase at the end of closed beta will involve a large chunk of "bigger-ticket items like cosmetic pets, sound/music packs for your claims, name/gender changes, extra claim flags, and more."

As with all announcements, the devs want to hear your feedback so the plan can be adapted accordingly. (Note: Any and all purchased items are considered inventory and will never be wiped in alpha or beta.)
In this article: business-plan, cash-shop, dave-georgeson, eq, eq-next, eq-next-landmark, eqn, eqn-landmark, eqnl, everquest, everquest-next, everquest-next-landmark, fantasy, landmark, marketplace, monitization, sandbox, soe, sony-online-entertainment
All products recommended by Engadget are selected by our editorial team, independent of our parent company. Some of our stories include affiliate links. If you buy something through one of these links, we may earn an affiliate commission.