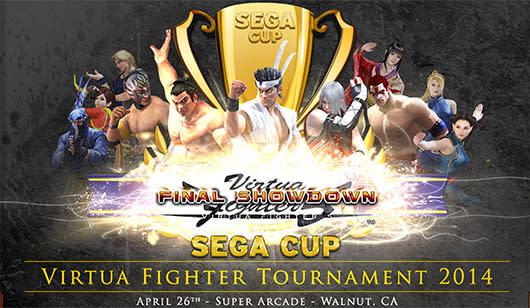 Come Saturday, April 26, Walnut, California will play host to the 2014 incarnation of the Sega Cup Virtua Fighter Tournament, and now you, too, can throw your hat into the polygonal ring.

As with last year's tournament, Sega Cup Virtua Fighter Tournament 2014 will focus on the latest version of the fighter, Virtua Fighter 5: Final Showdown. Games will take place on the PlayStation 3 and each round will be decided by best of three matches. The top 16 players in the tournament will take home a portion of the "over $15,000" in prize money at stake at the event.

Full details on how to register for the tournament can be found at Eventbrite, though keep in mind that there is an entry fee of $10, and currently there are only 111 spots remaining. Additional details on the event can be found at the tournament's official website.
[Image: Sega]
In this article: Fighting, fighting-game, playstation, ps3, sega, tournament, virtua-fighter, virtua-fighter-5-final-showdown
All products recommended by Engadget are selected by our editorial team, independent of our parent company. Some of our stories include affiliate links. If you buy something through one of these links, we may earn an affiliate commission.