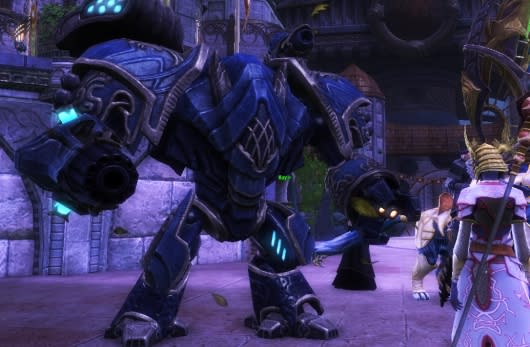 This past weekend, RIFT players and devs alike jumped into the new Steppes of Infinity Conquest to try out the PvP map on the test server.

On the forums, a dev gave players an idea of what to expect from the map, saying that teams will be ferrying stones between upgradable forts for points. However, once 1,750 player deaths occur, players have a five-minute timer to score as much as possible followed by loot for the winners.

The devs followed up the playtest with a peek at some of the upcoming goodies for the game, including an Umbral Budgie mount, a mech mount, and a new powerful focus.
In this article: conquest, f2p, fantasy, free-to-play, mech-mount, mount, mounts, patch, play-test, playtest, preview, pvp, rift, rift-lite, rift-planes-of-telara, rvr, Steppes-of-Infinity, Steppes-of-Infinity-Conquest, three-faction-pvp, three-way-pvp, trion, trion-worlds
All products recommended by Engadget are selected by our editorial team, independent of our parent company. Some of our stories include affiliate links. If you buy something through one of these links, we may earn an affiliate commission.