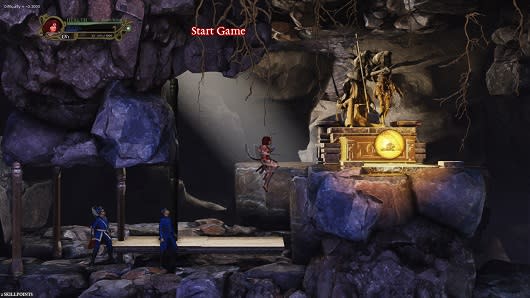 ACE Team is one again brewing up a concoction of genres in the newly-unveiled Abyss Odyssey, a 2D fantasy action platformer that's centered around a "deep fighting engine." As well as including roguelike elements such as randomly-generated levels, the Zeno Clash and Rock of Ages studio aims to feature enemy fights in Abyss Odyssey akin to the one-on-one encounters of fighting games.

"For enemies, we basically have a roster of fighters," Carlos Bordeu explained in the game's debut trailer. "For instance if you're fighting a skeleton in the game, it's not just a simple enemy that moves forwards, backwards, and maybe just punches and throws bones. It's a complex AI with an equivalent moveset to your own."

Players can also transform their heroes into one of the game's enemies by capturing its soul, letting them take on its appearance and moveset. ACE Team didn't reveal any details on the story in Abyss Odyssey, but it looks to reprise the ancient, mystical nature of the studio's previous work, and the first gameplay footage showcases a female playable hero.

Going by the trailer, we can expect Abyss Odyssey to come to PS3, Xbox 360, and PC via Steam, but there's no news as yet on a release window [Update: Publisher Atlus confirmed the platforms in a press release, along with a 2014 release window]
[Image: Atlus]
Show full PR text
Irvine, Calif. - March 5, 2014 - Abyss Odyssey is a downward journey into the depths of the unknown. Developed by ACE Team (Zeno Clash series, Rock of Ages), Abyss Odyssey is dripping with Art Nouveau style. In the game, three warriors are available to challenge the titular abyss: the bold Katrien, the tortured specter Ghost Monk, and the ethereal Pincoya. But no matter how powerful these warriors get, their descent is a circular trip - the action adventure of Abyss Odyssey is infinitely replayable.

The side-scrolling levels never play out the same way twice - be it the monsters they are filled with, the locations of life-saving merchants, or the pathways between levels. There are only two constants in Abyss Odyssey: a great evil awaits at the bottom of the pit, and succeed or die, the warriors will have to battle the abyss for eternity. But the enemies in the abyss are no mere fodder - each one has a complex set of moves. They also have a weakness: almost every enemy can be possessed and controlled by the player...

Players who brave the dangers in Abyss Odyssey will encounter:
The Infinite Abyss - Procedurally generated levels will allow the three warriors to battle for eternity.
Technically Deep - Since combat is the core of the game, ACE Team specifically focused on implementing fighting game mechanics into the action. Dodge-cancels and other technically demanding techniques will unlock the warriors' true powers in combat.
Know Thy Enemy - Possess almost any enemy in the game to use its skills and combat abilities...each foe is as technically complex as the main warriors.
ACE Developed - From the independent team behind some of the most boldly creative, aesthetically interesting titles: the Zeno Clash series and Rock of Ages.
Developed by ACE Team and published by ATLUS, Abyss Odyssey will be available in summer 2014 as a downloadable arcade title for Xbox 360, PlayStation 3, and PC. More details on Abyss Odyssey are to come!
About ATLUS
Index Digital Media, Inc.'s ATLUS brand has become known across the industry as a mark of high-quality, deeply immersive, uniquely Japanese video game experiences. With award-winning titles that reach across a variety of genres and platforms, including the Shin Megami Tensei® and Persona® series of role-playing games, the ground-breaking action-adventure/puzzle game Catherine™, and the much-celebrated RPG Demon's Souls™, ATLUS is committed to offering the highest standard in interactive entertainment experiences.
In this article: abyss-odyssey, ace-team, atlus, microsoft, pc, playstation, ps3, steam, xbox
All products recommended by Engadget are selected by our editorial team, independent of our parent company. Some of our stories include affiliate links. If you buy something through one of these links, we may earn an affiliate commission.