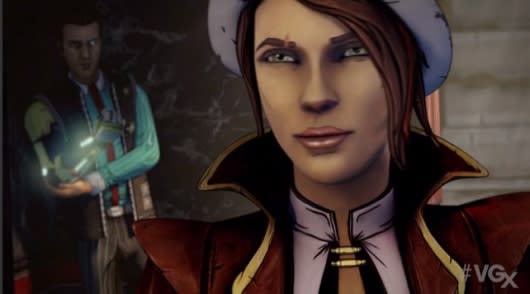 A panel at the SXSW festival has shed new light on Tales From The Borderlands, the story-driven adventure game collaboration between Telltale and Gearbox. Polygon reports that the two main characters, Rhys and Fiona, will narrate the story from a future perspective - in other words, what you play is what the characters say happened.

Telltale President Kevin Bruner told the panel's audience, "You never really play what actually happened, you're playing this Big Fish version of what happened." Given that Rhys works for megacorporation Hyperion (which is led by Borderlands 2 villain Handsome Jack) and that Fiona is a con artist, that's shaky ground to stand on.

The characters' backgrounds also means that they won't be world-saving heroes; these are people motivated primarily by greed. Unlike Telltale's The Walking Dead or The Wolf Among Us, which often force players to choose between bad and worse, Tales From The Borderlands will present players with two extremely desirable options. The game's tone will also set it apart, as it will be a lighter, more humorous affair than Clementine or Bigby's misadventures.

Tales From The Borderlands is due later this year.
[Image: Telltale Games/Gearbox Software]
In this article: adventure-game, borderlands, gearbox-software, sxsw, sxsw2014, tales-from-the-borderlands, telltale-games
All products recommended by Engadget are selected by our editorial team, independent of our parent company. Some of our stories include affiliate links. If you buy something through one of these links, we may earn an affiliate commission.