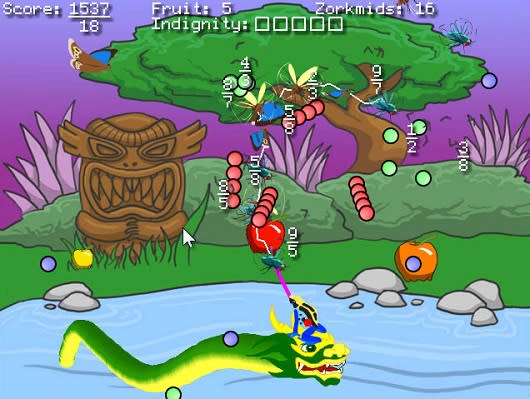 Among our Best of the Rest picks for 2012 was a small, free Flash-based game called Frog Fractions. Now, the game's sequel is seeking $60,000 on Kickstarter to bring more unexpected fun to players.

Developed by Jim Crawford (under the guise of the developer name Twinbeard), the first Frog Fractions operated under the premise of being a piece of "edutainment," as players expected to learn about fractions while catching flies as a frog. As the game unwound, the adventure became strange and fractions became an afterthought.

"I can't describe what I'm going to make in detail, but I can tell you that I've been thinking about how to properly follow up Frog Fractions for the past year, and I believe I can make something genuinely awesome," he said. The crowdfunding campaign for Frog Fractions 2 (working title) will end on April 9. The game is planned for PC, with Mac and Linux ports to follow.
[Image: Twinbeard]
In this article: Bizarre, CrowdFunding, flash, fractions, frog, frog-fractions, frog-fractions-2, jim-crawford, kickstarter, Linux, mac, pc, subversive, twinbeard, weird
All products recommended by Engadget are selected by our editorial team, independent of our parent company. Some of our stories include affiliate links. If you buy something through one of these links, we may earn an affiliate commission.