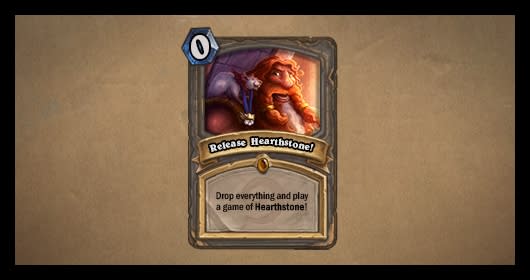 Whoa, this sneaked up on us unexpectedly! Blizzard abruptly announced today that Hearthstone has officially launched and updated to the new 1.0.0.4944 patch.

The free-to-play card game has been widely available for some time now, but now it's all there for keeps. Today's patch includes golden hero and special card backing visuals as rewards for ranked play. Other changes include balance tweaks, a reconnect feature, access to multiple regions, and a whole lotta bug fixes.

Players can also earn a Hearthstone mount for World of Warcraft by winning three games in play or arena mode.
In this article: activision, blizzard, blizzard-entertainment, breaking, ccg, ccgmmo, fantasy, hearthstone, launch, mount, patch, promotion, release, tcg, tcgmmo, trading-card-game, warcraft, world-of-warcraft, wow
All products recommended by Engadget are selected by our editorial team, independent of our parent company. Some of our stories include affiliate links. If you buy something through one of these links, we may earn an affiliate commission.