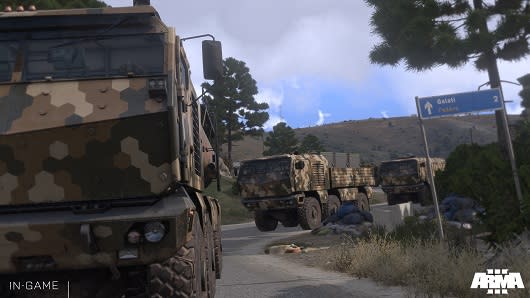 Arma 3 concludes its The East Wind campaign on March 20, when the military shooter launches its third and final episode, 'Win.' The episode brings an end to the story of NATO soldier Ben Kerry and his Omega squad, and the near-future conflict that's seen the Mediterranean swallowed up in huge, all-out war.

The episode also includes a separate mission called the Fixed-Wing Showcase. It's designed to get players acquainted with the two new aircraft being added in the update, namely the A-164 Wipeout and the To-199 Neophron.

Bohemia Interactive's announcement follows the news Dean Hall is to step down from DayZ development by the end of the year. The Arma 2 mod-turned-standalone remains a priority for Bohemia, who recently doubled the number of people working on the project.
[Image: Bohemia Interactive]
In this article: arma-3, bohemia-interactive, pc, release-date, steam
All products recommended by Engadget are selected by our editorial team, independent of our parent company. Some of our stories include affiliate links. If you buy something through one of these links, we may earn an affiliate commission.