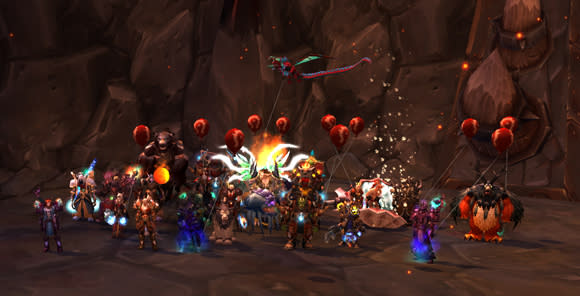 Raiders, rejoice -- a new cross-realm raiding feature has now been implemented. In a blue post by Rygarius, it was announced that cross-realm raiding via BattleTag and RealID has been enabled not just for Flex mode, but for Normal and Heroic mode raiding on all servers. These cross-realm raids will be allowed to get the Reins of the Kor'kron War Wolf and all titles associated with the Siege of Orgrimmar, none of which were previously allowed on Flex or LFR difficulty.

Rygarius
We've recently implemented an often requested feature to enable cross-realm raiding for Siege of Orgrimmar. Cross-realm BattleTag™ and Real ID friends can now raid together and take the fight to Garrosh on Normal or Heroic difficulty. Players will be able to earn greater rewards such as Reins of the Kor'kron War Wolf or the title of Conqueror/Liberator of Orgrimmar; both of which aren't available to be earned within Flexible or Raid Finder difficulty.

This change is currently live.

source
If your cross-realm Flex group has been doing well and defeating Garrosh, now might just be the time to step into Normal mode, test the waters against the forces of Hellscream on a higher difficulty, and reap all the rewards for doing so. Good luck!

Edit: Ion "Watcher" Hazzikostas has stepped into the thread in question to clarify a few points. Read on after the break.

This is a change very late into a tier, which leads me to believe that when WoD comes out this change won't be live and will still require guilds on the same server to tackle Mythic raiding.
Correct -- current-tier Mythic raiding in Warlords will still be limited to players from a single server. In the meantime, though, this change may help guilds that are trying to recruit and grow in preparation for Mythic raiding.

As for realm firsts, realm firsts are guild achievements; you need to be in a guild group, which is by definition 8/10 or 20/25 members coming from a single guild on a single server. You could theoretically have a couple of guests from a different server and still claim the realm first, but ultimately 80% of the group still has to be from the same guild.
source
In this article: breaking, cross-realm, cross-realm-raiding, flex-raiding, heroic-raiding, lfr-raiding, mists-of-pandaria, normal-mode-raiding, siege-of-orgrimmar, world-of-warcraft
All products recommended by Engadget are selected by our editorial team, independent of our parent company. Some of our stories include affiliate links. If you buy something through one of these links, we may earn an affiliate commission.