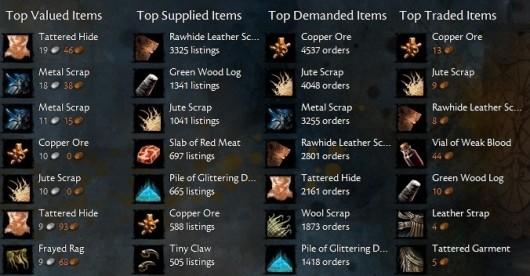 Diablo III's gold and RMT auction houses shut down this week. Final Fantasy XI is getting auction house upgrades. Ultima Online launched vendor searching today after 16.5 years of operation. This calls for an auction house-themed Think Tank! I polled the Massively staffers about whether or not MMORPGs should have auction houses, and specifically, whether they enhance or detract from the economic experience of a game. Chime in!

@ceruleangrey: I love auction houses. I didn't realize how necessary I find them until I played the original Guild Wars and got to experience the magic of selling stuff through the trade channel in Kamadan (or "Spamadan," as it was affectionately known). Direct salesmanship has never been my strong point, and I've never been good at direct buysmanship either -- just let me pay a friendly NPC to store and distribute my wares. I have important adventurer business to attend to, like doing emotes and trying on clothes and taking candid screenshots of celebrity NPCs.

@Beau_Hindman: I have to be honest: I rarely, if ever, use an auction house in a game. Not only do I rarely find the need (I'm not much of a crafter), but the layouts usually serve only to give me a migraine. Also, I lost interest when they started becoming magical portals that could store and transport goods all over the world. I used to love the regional brokers in Vanguard. I made a mint off of being a travelling arrow salesman. Then, they merged them all together. I think that was the last time I actively used one.

@nbrianna: I strongly prefer player vendors to auction halls, but I'd rather have an auction hall than nothing, and I can absolutely have fun playing that kind of market -- I'm just over the days of macro-spam to sell something in a chat channel. At the same time, player vendors without some sort of global search system can be a royal pain; I loved shopping and exploring player vendors in Ultima Online and SWG before they had vendor search, but systems like that favor a handful of crafters or locations and leave too many players with potentially superior prices and goods out in the cold. And the only real difference between vendor search and an auction hall is convenience. My ideal game would have both.

@jefreahard: I don't mind auction houses as long as they're one part of a robust economic system that also includes regional/local markets, trade, player shops, etc. If an auction house is all you've got, eh, you've got a pale imitation of an MMO, at best.

@Sypster: Absolutely they should. I do not have the patience to flit between little shops and hunt down players with specific goods; I want a one-stop shopping experience. I mostly utilize auction houses to sell crafting mats as a reliable source of income, with the occasional purchase of an expensive item to justify my frugal savings. I'm sure there are good ways to do game economies without an AH if the game is structured that way, but I feel that they do the job just fine of providing the lubricant and engine that keeps the economy going in most MMOs. Now, what tools and info AHs should have is another and perhaps better questions, as too many of these are anemic in features.

@MJ_Guthrie: Just say no to auction houses! Seriously, I want a game that depends on player shops and transporting goods between regions for the economy. Having a one-stop-shop auction house is the antithesis of a vibrant economy in my mind and wipes out whole sectors of gameplay like traveling merchant. On a universal auction house it just becomes a matter of who undercuts whom until there is little value left and it isn't even worth it for crafters to bother because their materials cost more than they can sell items for.

Instead, I prefer a marketboard that can tell you were things are sold and for what price (like the marketboards in EverQuest II houses), but you can't buy anything from them. This way, you can determine whether or not it is worth your time and effort to go for the really awesome item that's out of the way or settle on the other one that's closer. At the most, I'd like to only see small items available on a region-only auction house so that new players who cannot yet travel the game (and may not even know the places yet!) have a chance to purchase viable items for their use, a bit like SWG used to have. But the market must remain regional only, never universal. The same principle applies for banking as well: regional only! This way, shop location, marketing, and all that can become a part of the economic game -- not just who can place an item for sale for one copper cheaper.

In this article: ah, auction-hall, auction-house, brianna-royce-ttt, editorial, featured, group-editorial, massively-staff, massively-team, opinion, opinions, roundtable, roundup, the-think-tank, think-tank
All products recommended by Engadget are selected by our editorial team, independent of our parent company. Some of our stories include affiliate links. If you buy something through one of these links, we may earn an affiliate commission.