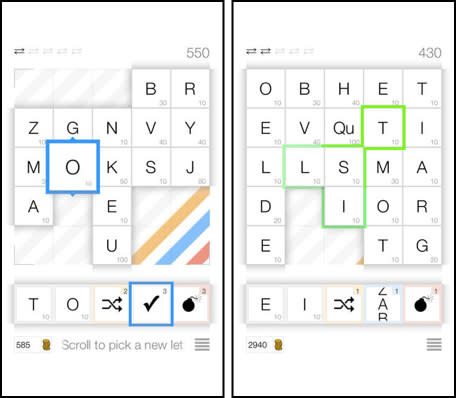 Word Forward is a clever word puzzle game developed by Shane McCafferty and published by AppyNation. The app has a hint of Scrabble, but adds new twist to the word spelling game.

Word Forward challenges you to clear a 5 x 5 board of letter tiles by spelling words. Each letter is worth a specific value and these amounts are combined when you spell a word. Depending on the level, you start with a specific number of points, say 500. As you spell words, their value is subtracted from these points. In this example, the game is done when you reduce the points to 200. You get extra bonus points if you clear the entire board and reach zero points.

The game is more than a simple speller. There are modifiers that allow you to change your tiles on the gameboard. Modifiers include the following:

You have a limited number of modifiers per round and can buy additional ones using the coin rewards system in the game. You earn coins for playing and can purchase more via an in-app purchase. The challenge comes in removing the letters in a way that you are not left with standalone titles that are orphaned and no longer usable. Modifiers cane be used sparingly in your strategy and may be enough to push your score below the winning mark.

WordForward is a thinking man's game that is challenging, but not difficult. You can play individual rounds or play online against other GameCenter members. The app is available for free with ads that appear after each round. There are in-app purchases for coins, but you don't need to buy any coins to win the game.

In this article: app review, appreview, daily app, daily iphone app, iphone, newsletter, review, WordForward
All products recommended by Engadget are selected by our editorial team, independent of our parent company. Some of our stories include affiliate links. If you buy something through one of these links, we may earn an affiliate commission.
Share
Tweet
Share