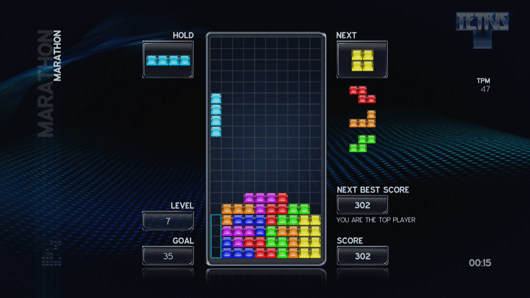 UK researchers have found that playing a game of Tetris can help reduce cravings for people with addictions. The study, published in scientific journal Appetite, was designed to test Elaborated Intrusion Theory, which suggests that cravings are not just desire-based, but visual as well. The researchers therefore hypothesized that performing a visual-intensive task - in this case, Tetris - could reduce cravings.

A group of 119 college students were told to describe their cravings before playing a game of Tetris, at which point the game would either load or produce an error message claiming it could not be played. Students who successfully completed a game saw their cravings reduced by 24 percent more than those who did not.

While the researchers used Tetris in their analysis, Jackie Andrade, Plymouth University psychology professor and co-author of the study, told NBC that anything visually stimulating would work. "It also doesn't have to be mentally demanding, but if it is, it has a better chance to block the craving," she said.

In other words, even watching TV - supposing it's not The Food Channel - could potentially work to curb the munchies. However, the interactive nature of games makes them not only more demanding of your attention, but also more fun (we know, it's a shock), which in turn made participants of the study better adhere to using them as the researchers intended. It's not exactly an isolated event, either. We've seen games be used to help get senior women active, thus lowering their levels of urinary incontinence.

It's almost as though people enjoy video games or something. More research on this is clearly needed. Everyone, play your video games and report back here, ASAP.
[Image: EA]
In this article: appetite, jackie-andrade, plymouth-university, research, science, study, tetris
All products recommended by Engadget are selected by our editorial team, independent of our parent company. Some of our stories include affiliate links. If you buy something through one of these links, we may earn an affiliate commission.