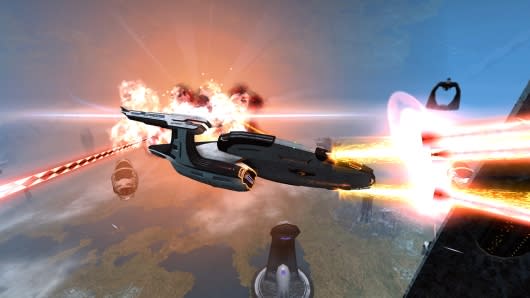 I always feel like explaining my desire to play Star Trek Online can be summed up quite simply with eight words. "Space -- the final frontier. These are the voyages..."

It sounds corny, but it's true. My various natterings on the site have covered a lot of settings for which I have no real affection, but Star Trek is different. It's been a fixed point for me since I was around seven years old. It's a setting I have an immense fondness for, something I've been invested in for most of my life. Really, the thing that amazes me is that I manage to take time away from Star Trek Online.

But loving the name on the box would only take me so far if the game were a big steaming pile. Every time I go back to the game, even though I have complaints here and there, I fall back in love with the game as a whole all over again. It's not perfect, but it's amazingly well-done. Oddly, part of my affection for the actual mechanical portion of the game comes from something I barely even realized until someone else pointed it out to me: Star Trek Online is the closest game we've gotten to City of Heroes in terms of structure.

Seriously. Want to go do story missions? Sure. Want to kick around in randomly generated space missions? Go for it. Like teaming up? Killer. Reputations? All right. The game does not care. You set your own objectives, you build your own sort of character, and if you want to place your Science captain inside of a cannon-wielding Escort, good for you.

More to the point, there's a lot of flexibility in how you put your character together because of the skill system and your various officers. There are only three careers, but all three are fully capable of taking on several different roles. There's an emphasis on giving every character and ship some measure of offense and defense, rather than consuming yourself completely with one goal. It plays out well, too: An Engineering captain can free more space in her ship for damage-boosting abilities, while a Tactical captain provides more straight offense while also freeing more space to make up for defensive shortcomings.

In some ways it's even a little more flexible than City of Heroes was because the only thing you can't change at all is your captain's profession, and there are only three of those anyway. Skills can be reassigned, ships can be changed, bridge officers can be altered, and everything can be edited to meet your needs and wants. And there are a lot of options when you hit the level cap even if some of the systems in place do come across as being rather grindy.

All of this is backed up with excellent space combat. Pretty much everyone gushes about space combat. Even the developers seem to prefer it to ground combat, as evidenced by the fact that there are far more space skills than ground skills and space traits are valued over ground traits. And it's with good cause. Space battles are both fun and entirely in keeping within the spirit of the source material.

Most space battles in science fiction are modeled after Star Wars, which is to say that they're World War II dogfights from the Pacific theater. Big ships that launch a bunch of fighters and bombers who do most of the actual work while the big guys idly toss out mortar volleys and the like. There's a reason Star Wars: The Old Republic let you immediately get in the cockpit of a starfighter instead of a capital ship.

Star Trek Online, on the other hand, strikes a different balance. These are closer to naval battles, but they also have elements you just don't see otherwise. It's active without being action-based, and you spend a great deal of time adjusting your speed and position as you work on chewing down opposing ships by eroding their shields and then blasting at their hulls. There is a plethora of different weapon types, different abilities, different options for combat -- so many tricks that it feels as if you could keep coming up with new configurations forever.

Even the ground combat is satisfying in its own way, albeit not as good. The shooter-style optional interface isn't a game-changer, but it does make the game more entertaining. And there are certainly plenty of options for how you want to play your character. One of my Engineering captains uses turrets and generators for party support; another sets up debuffs and shield reinforcements. Ground combat is a bit less polished, and the AI is weak, but it still shakes down into good fun.

But all of that wouldn't make much of a difference if it didn't feel like Star Trek. That was what bothered a lot of fans at launch: that the game wasn't Star Trek enough. There was too much emphasis on combat, not enough that felt true to the ethos set down by years of movies and shows.

I disagree, partly because the game manages to fit in remarkably well with established factions; in the four years the game has been running, the only "new" alien race added are the Deferi, with every other enemy being a direct callback to the show. Sometimes it's a clear homage to past series (such as the arcs focused around Deep Space 9 and Bajor), while other times it's a bit more original, but the game has a real sense of where it comes from and works additions in naturally.

But more even than that, the game is clearly made by people who enjoy Star Trek. Yes, there's more combat than you find in an average episode of the show, but there's still just as much dialogue about the Federation trying to talk things through and find a peaceful solution. There are plenty of missions about learning new things. There are countless missions to explore uncharged regions of space. The game's first expansion even ties into that theme with the idea that the Romulans -- one of the earliest villains in the franchise -- can in fact become friends.

This is why I keep falling back to the same refrain of why I play this game. At the end of the day, even if the details aren't always quite right, the game's soul is in the right place. It's a chance to do something I've wanted to do since I was a child: to be a Starfleet captain, even if just in a small way.

It's why even without mentioning the roleplaying potential or the diversity of minigames or the explorable regions or the character creator, I can say that there's a very simple reason I keep playing.

"Space -- the final frontier. These are the voyages..."

There's an MMO born every day, and every game is someone's favorite. Why I Play is a column in which the Massively staff members kick back and reminisce about all their favorite MMOs. Whether it's the new hotness or an old fan favorite loaded with nostalgia, each title we cover here tugs at our heartstrings and keeps us coming back for more.

In this article: backstory, cryptic, cryptic-studios, f2p, featured, free-to-play, game-mechanics, intellectual-property, ip, lore, opinion, perfect-world, perfect-world-entertainment, pwe, sci-fi, setting, star-trek, star-trek-mmo, star-trek-online, sto, why-i-play
All products recommended by Engadget are selected by our editorial team, independent of our parent company. Some of our stories include affiliate links. If you buy something through one of these links, we may earn an affiliate commission.