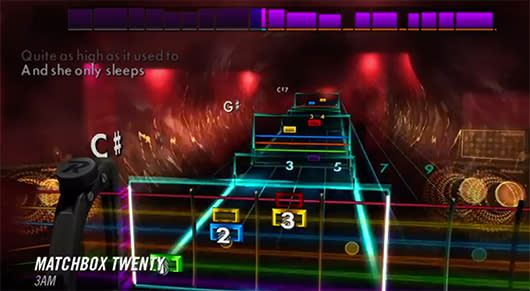 The latest act to join guitar tutor Rocksmith 2014 is Matchbox Twenty, a band you'll recall from the soundtrack of nearly every romantic comedy released in the latter part of the 1990s.

Included in this latest DLC offering are five songs: "Unwell," "Push," "3AM," "How Far We've Come" and "She's So Mean." Like the prior Rocksmith DLC releases, which showcased bands such as Weezer and Oasis, all five of these tracks can be purchased for $12. If you'd rather pick up a few songs piecemeal, each is individually priced at $3.

The Matchbox Twenty DLC is currently available for every incarnation of Rocksmith 2014, whether its on the Xbox 360, PlayStation 3 or PC. According to publisher Ubisoft, Rocksmith 2014 can teach novices to play guitar in only 60 days, which should give you just enough time to assemble a band, book a few gigs, then watch the whole thing collapse due to drugs, sexy groupies and the prying eyes of the E! True Hollywood Story.
[Image: Ubisoft]
Show full PR text
*** MEDIA ALERT ***

WHAT: Ubisoft® announced today that the Matchbox Twenty DLC pack for Rocksmith® 2014 Edition is now available for download on Xbox LIVE for Xbox® 360, the PlayStation Network for the PlayStation® 3 and Steam for PC and Mac.

Rocksmith 2014 Edition is the sequel to 2011's immensely popular Rocksmith, which taught over 1.5 million players how to play the guitar by enabling players to plug any real guitar or bass with a standard ¼" jack directly into their Xbox® 360 video game and entertainment system from Microsoft, the Sony PlayStation® 3 computer entertainment system, PC or Mac®.

Rocksmith 2014 Edition includes new features, new modes, optimized tracking and responsiveness, and completely redesigned interface, new techniques and tunings, and much more. Aspiring guitarists can now learn to play guitar in just 60 days with Rocksmith 2014 Edition.
In this article: dlc, matchbox-twenty, microsoft, music, pc, playstation, ps3, rocksmith, rocksmith-2014, ubisoft, xbox
All products recommended by Engadget are selected by our editorial team, independent of our parent company. Some of our stories include affiliate links. If you buy something through one of these links, we may earn an affiliate commission.