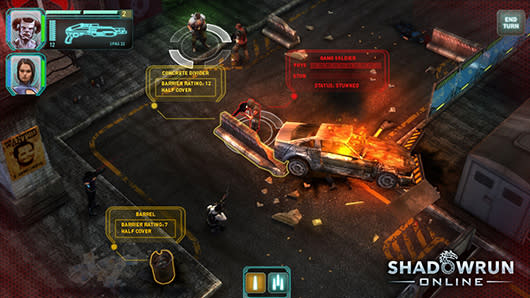 Those anxiously awaiting the turn-based roleplaying action of Shadowrun Online won't have to wait much longer to dip into the cyberpunk world. Developer Cliffhanger Productions has revealed that the game will make its Steam Early Access debut on March 31.

Though the version of Shadowrun Online that appears on Early Access will not be the complete game, it should give players a good idea of how the full game is shaping up. According to Cliffhanger, the Early Access build will initially serve as a prologue to the core Shadowrun Online campaign and will introduce players to the game's combat mechanics. Once the basics have been nailed down, the developer plans to roll out periodic updates which will bring new content to Shadowrun Online. No specific schedule for these updates has been established, but Cliffhanger hopes to issue new content on a monthly basis.

The final, complete version of Shadowrun Online is still slated for release on PC, Mac and mobile devices toward the end of 2014, but keep in mind that any number of things could happen during Early Access testing to delay that vague release window.
[Image: Cliffhanger Productions]
Show full PR text
This one's for all you smugglers, street shaman, enforcers, and hackers. After a succesful run on Kickstarter and over a year of development, Shadowrun Online is emerging on Steam Early Access.


March 27, 2014 - Shadowrun Online, the turn-based MMO successfully funded on Kickstarter, is coming to Steam Early Access on March 31. A prequel to the first Shadowrun Online campaign, Lockdown (also an upcoming tabletop RPG book), this introductory offering will focus on the core mechanics of combat.

"We are very excited (and a little frightened) to finally show this first glimpse of the game to the world," said Wagner. "We don't want to pile on features unless we have nailed the core gameplay elements, so we created this small and polished section for our players to enjoy."

The initial release of Shadowrun Online through Early Access will provide players with a PvP map, two characters, four missions, and basic skills. This limited, combat-focused approach will provide valuable feedback from Kickstarter backers and the Steam community and help guide development.

"This is a once in a lifetime opportunity for us and we have invested everything (and then some) into development. Although we originally planned to begin our release schedule last year, it became apparent that our original code-base was too restricting, and we weren't willing to make compromises due to code limitations. Our backers and the Shadowrun community have been incredibly supportive, and more than anything we want to live up to their expectations."

Shadowrun Online: Lockdown will be cross-platform when it releases, allowing people to play on PC, Mac, and mobile devices.
In this article: cliffhanger-productions, early-access, mac, mobile, pc, shadowrun, shadowrun-online, steam, steam-early-access
All products recommended by Engadget are selected by our editorial team, independent of our parent company. Some of our stories include affiliate links. If you buy something through one of these links, we may earn an affiliate commission.