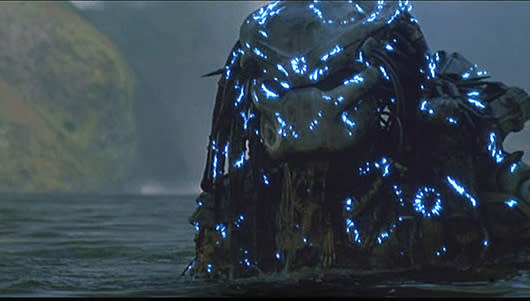 When Activision releases the Devastation DLC for Call of Duty: Ghosts on April 3, the addition may include a familiar face - or, more specifically, a familiar shimmering outline.

If you pay a visit to the Call of Duty Instagram account (or click through the break below), you'll find a short teaser clip that bears all the familiar hallmarks of the extraterrestrial hunter first made famous in the 1987 Arnold Schwarzenegger action classic Predator. The vignette depicts a humid jungle, a crashed helicopter and the familiar staccato clicking of that film's titular creature. Though we're never given a good look at The Predator, the clip ends with a visually distorted, nigh-invisible creature rushing toward the camera.

While the inclusion of a classic cinematic monster might have seemed odd a few months ago, Call of Duty: Ghosts has been gradually moving away from strict realism and into the realm of pure entertainment spectacle. The Onslaught DLC pack, which debuted in January, brought horror icon Michael Myers to the shooter, while the game's ongoing Extinction DLC storyline pits human soldiers against hordes of aliens in the wastes of rural Alaska.
[Image: 20th Century Fox]
In this article: call-of-duty-ghosts, devastation, dlc, infinity-ward, microsoft, nintendo, playstation, predator, ps3, ps4, wii-u, xbox, xbox-one
All products recommended by Engadget are selected by our editorial team, independent of our parent company. Some of our stories include affiliate links. If you buy something through one of these links, we may earn an affiliate commission.