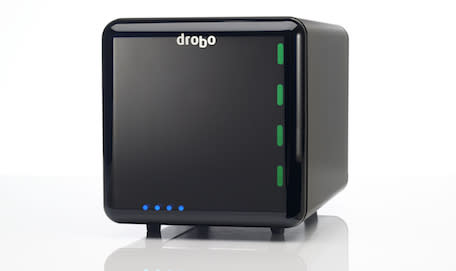 Drobo announced the 3rd generation of its 4-bay namesake device yesterday, and by any indication the newest member of the Drobo family should be quite popular. Sporting a pair of USB 3.0 ports, the Drobo 4-bay starts at just US$349 for the bare box that you can then begin filling with any 3.5" SATA II/III drives that you may have. As before, Drobo's BeyondRAID technology allows you to mix-and-match drives so that you can start off with smaller drives and replace them with higher-capacity drives as you can afford them.

The new Drobo also features a redesigned architecture that provides speeds about three times faster than those available with the previous generation and array rebuild times about four times faster than before. The company also added battery backup as icing on the storage cake, giving the new box more protection from power outages by temporarily storing in-progress transactions until the array powers up again.

If you're a current Drobo owner and want to migrate to the new device, the company is offering $50 one of the new units bring the price tag to a very affordable $299. Just pull your drives out of the old Drobo and stick 'em in the new unit to take advantage of the enhancements. That deal will be available through June 9, 2014 on sales made through www.drobostore.com and some authorized resellers. The devices will begin to ship in late April, and we expect to have a full TUAW review of the 3rd generation Drobo soon after.

In this article: 3rd generation drobo, accessories, beyondRAID, drobo, Mac, peripherals, USB 3.0
All products recommended by Engadget are selected by our editorial team, independent of our parent company. Some of our stories include affiliate links. If you buy something through one of these links, we may earn an affiliate commission.