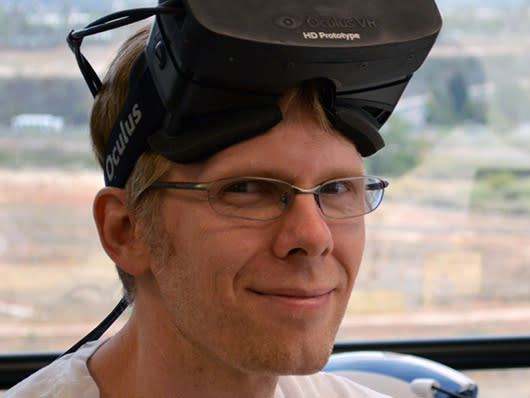 John Carmack, co-founder of id Software and current CTO of Oculus, has weighed in on the Internet's ... shall we say "mixed" reaction to the news of Facebook purchasing the virtual reality-oriented company. Carmack responded to a post titled "Wrong and Right Reasons To Be Upset About Oculus" on Anamanaguchi lead songwriter Peter Berkman's Tumblr page, noting that, while he was not involved in the negotiations with Facebook, he has "reason to believe that they get the Big Picture as I see it, and will be a powerful force towards making it happen."

That being said, even Carmack seems surprised by the acquisition. "Honestly, I wasn't expecting Facebook (or this soon). I have zero personal background with them, and I could think of other companies that would have more obvious synergies," Carmack wrote.

Many have expressed concern over Facebook's policies regarding private information, but Carmack doesn't share those worries. "I'm not a 'privacy is gone, get over it' sort of person, and I fully support people that want [to] remain unobserved, but that means disengaging from many opportunities. The idea that companies are supposed to interact with you and not pay attention has never seemed sane to me," he wrote in a separate comment. "I have never felt harmed by data mining, and I rather like the recommendations that Amazon gives me on each visit."
[Image: Oculus]
In this article: acquisition, business, facebook, john-carmack, oculus, oculus-rift, oculus-vr, pc, virtual-reality
All products recommended by Engadget are selected by our editorial team, independent of our parent company. Some of our stories include affiliate links. If you buy something through one of these links, we may earn an affiliate commission.