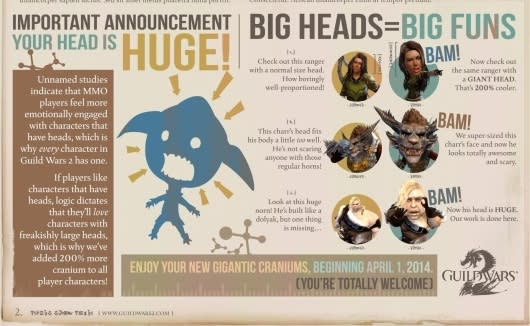 So everyone thought that Guild Wars 2 was just going to do Super Adventure Box again. But no, this year is going a different route. After all, you're super important in the game, aren't you? So why not let all of that importance go straight to your cranium? The designers have turned on the game's big head mode, and it's probably going to significantly improve your experience within the game as a whole. Maybe. Who knows, it could happen.

The point is that the super adventure is now in your skull, which is greatly engorged, and you can log into the game right now to start playing with the biggest head your character has ever had in Tyria. Bigger even than Trahearne's head! Check out the full infographic on the update just past the break (click for a larger version) and enjoy the new visuals as you head into battle. In this article: anet, april-fools, april-fools-jokes, arenanet, big-head, buy-to-play, culture, fantasy, guild-wars-2, gw2, humor, humorous, joke, jokes, macguyver, ncsoft, news, news-items, prank
All products recommended by Engadget are selected by our editorial team, independent of our parent company. Some of our stories include affiliate links. If you buy something through one of these links, we may earn an affiliate commission.