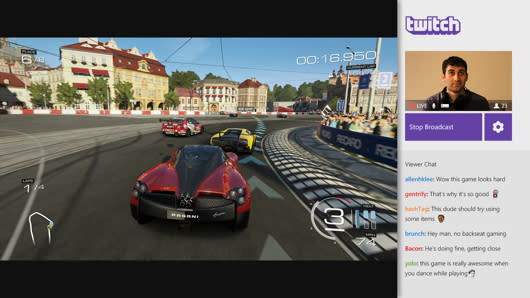 Sony and Twitch trotted out plenty of numbers since the PS4 launched with the streaming service, so it's not surprising to see Microsoft start talking about 23 million minutes broadcast since last month's launch, or how 30 percent of all Twitch broadcasts came from Xbox One on launch day. However, there is a catty little aside that's worth a bit of scrutiny.

"In its first week, 108,000 unique Twitch users tried their hand at broadcasting from Xbox One," reads Microsoft's blurb, "accounting for 22 percent of Twitch's unique broadcasters in the same period of time. To put that in perspective, according to Twitch, it took another console a month to achieve what the Twitch app on Xbox One did within its first week."

We'd point out how that perhaps doesn't account for the differences in install bases between launch and four months on, but the truth is we have no idea whatsoever what this "another console" is that Microsoft's referring to. Oh, well.

Instead, we'll round up the rest of the stats: 2.7 million minutes of Xbox One Twitchery were broadcast on launch day, and the average Xbox One cast on the streaming service is 28 minutes long. Also, the most broadcast Xbox One game? No surprises there.
[Image: Twitch]
In this article: microsoft, titanfall, twitch, xbox-one
All products recommended by Engadget are selected by our editorial team, independent of our parent company. Some of our stories include affiliate links. If you buy something through one of these links, we may earn an affiliate commission.