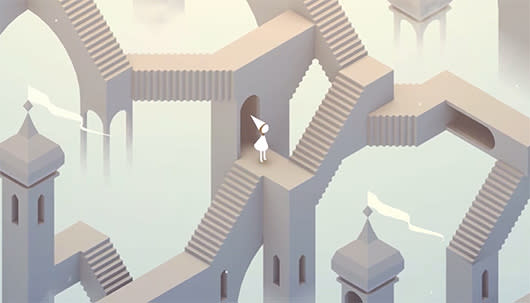 Monument Valley developer ustwo has revealed that the colorful indie adventure will make its iOS debut on Friday, April 4.

To celebrate the announcement, ustwo has also issued two trailers for the game. The first, which you can see above, stands as Monument Valley's first official gameplay trailer, though with that near-term release date, it doubles as a launch trailer. As you can see, Monument Valley's stages are optically challenging tributes to the mind-bending work of M.C. Escher. The game's protagonist, the adorably angular Princess Ida, is tasked with navigating each of these geometrically impossible levels in her ongoing search for forgiveness.

The second clip, which can be found past the break, offers a polished behind-the-scenes look at the creation of Monument Valley, which translates to just over four minutes of indie developers explaining their motivation for creating the attractive, off-kilter adventure.

Unfortunately lacking from ustwo's announcement is a price point for Monument Valley.
[Image: ustwo]
In this article: apple, indie, ios, ipad, iphone, mobile, monument-valley, ustwo
All products recommended by Engadget are selected by our editorial team, independent of our parent company. Some of our stories include affiliate links. If you buy something through one of these links, we may earn an affiliate commission.