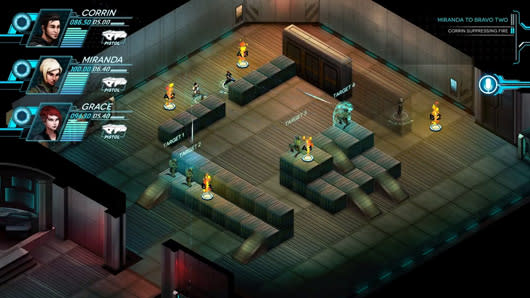 Voice-controlled RTS There Came an Echo is headed to the PlayStation 4 alongside previously announced ports for Xbox One and PC, developer Iridium Studios announced this week.

In There Came an Echo, players control an armed squadron using voice commands, issuing orders to the group and to individual teammates amid hectic firefights. Players can fully customize the game's recognized commands (allowing your squadmates to respond to a Captain Picard-esque "Make it so!" during combat, as the trailer above demonstrates), and the game features DualShock 4 controller support in addition to the default microphone controls.

There Came an Echo earned more than $115,000 in backer funding when it turned to Kickstarter for support in 2013, and is due for a Steam release later this year.
[Video: Iridium Studios]
In this article: iridium-studios, microsoft, pc, playstation, ps4, there-came-an-echo, xbox-one
All products recommended by Engadget are selected by our editorial team, independent of our parent company. Some of our stories include affiliate links. If you buy something through one of these links, we may earn an affiliate commission.