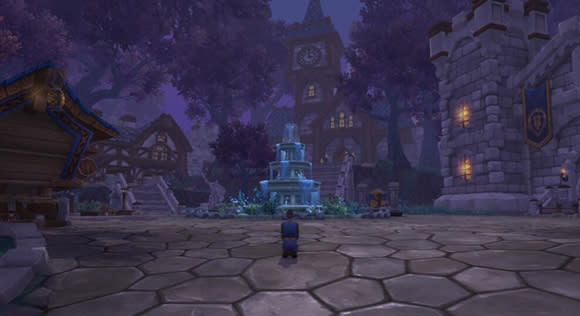 Garrisons seem to be shaping up to be the centerpiece of Warlords content -- not in the sometimes soul-crushing manner of the daily quest grind in Mists, but as an entertaining and engaging diversion for players to do at max level in between dungeons, raids, scenarios, and whatever else happens to pop up. We have yet to get a proper introduction to the feature, but we've been told and shown in glimpses here and there that it's going to be big. Much, much bigger than our farms.

Wowhead has been busily datamining everything under the sun from the Warlords alpha client, and some of that information directly involves the new feature. While there's not a clear picture of how exactly garrisons are going to work, the datamining does point out some fascinating details and perks. It's become incredibly clear that while garrisons have been referred to as WoW's version of player housing, in fact they're likely going to be much, much more than that.


Of immediate interest are the Garrison Specializations, which seem to offer unique perks.

Some of these involve followers, which we've heard a little about, but others are a little more intriguing. Rare mount traders? Will this be another way to access the really rare in-game mounts that currently can be obtained in the Black Market Auction House? The idea of rare fruit is also interesting, possibly indicating that the cooking profession is going to continue its engaging trend.

There is an extensive list of garrison buildings to choose from, as well. The list includes an Alchemy Lab, Armory, Barn, Barracks, Enchanter's Study, Engineering Works, Fishing Shack, Gem Boutique, Herb Garden, Inn, Lumber Mill, Mage Tower, Menagerie, Mine, Salvage Yard, Scribe's Quarters, Sparring Arena, Stables, Storehouse, Tailoring Emporium, The Forge, The Tannery, Trading Post, and Workshop. Whether or not we'll be able to use all 24 buildings at the same time is uncertain. If we can, that's not just a little garrison -- that's almost a full-fledged city right there. Each building offers its own perks as well, and again, they don't just affect Garrisons -- one of the Stable bonuses increases player mounted speed in Draenor, among other perks.

This isn't just player housing we're looking at. It's not even remotely similar to the farm in Halfhill, it's much, much larger than that. From just the bare little details dug up on the alpha client, it appears that what we're looking at here is Warlords' iteration of the game-within-a-game, something that we saw introduced in Mists of Pandaria with the Pet Battle system. Only this time, instead of a game we can play with our pets -- a system that doesn't affect the game itself -- we have a full-fledged, customizable game in which we can pick and choose how to enhance the world we're playing in.

While we don't have all the details, various tweets on Twitter have suggested we'll be hearing more about garrisons very soon -- and I for one can't wait to see that blurry picture fully realized.