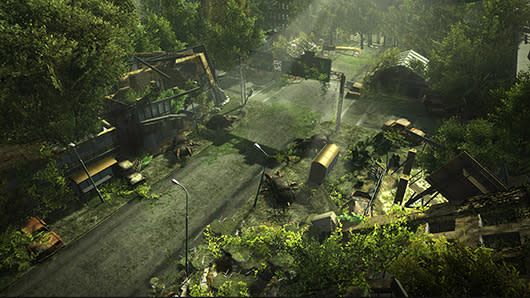 While "less than half" of Wasteland 2 is currently available in beta via Steam Early Access, an update coming next week will add another major area. After the update, Wasteland 2's beta will feature "most of the Arizona portion of the game."

According to "beta testing metrics and feedback," InXile estimates Wasteland 2 will take about 50 hours to complete for a regular playthough.

Developer InXile Entertainment is also teasing the location for the second portion of the game, which takes place in a post-apocalyptic Los Angeles (also known to residents simply as Los Angeles). The Los Angeles areas in Wasteland 2, teased above, will feature "the ruins of familiar landmarks overgrown with wild plant life, crawling with weird creatures, and dangerous mad cults." So, it's just like the real Los Angeles.

Wasteland 2 is the official sequel to the 1988 classic isometric role-playing game from developer Interplay. Its Kickstarter campaign, which sought a total of $900,000 to bring the series back from the dead, eventually accrued over $2.9 million.
[Images: InXile Entertainment]
In this article: Inxile-Entertainment, pc, wasteland-2
All products recommended by Engadget are selected by our editorial team, independent of our parent company. Some of our stories include affiliate links. If you buy something through one of these links, we may earn an affiliate commission.