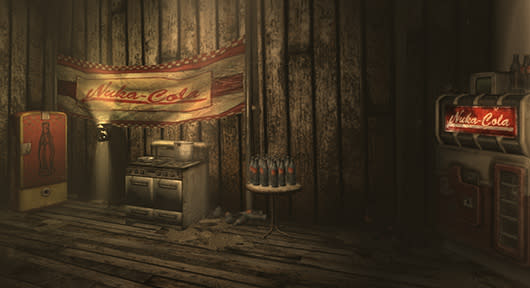 Not just the favorite carbonated beverage of the post-apocalypse, Nuka Cola is also a handy energy source, and wily vault dwellers have even been known to craft the sugary goop into a deadly weapon. While it's currently unclear what Zenimax plans to do in the event the trademark is granted, it is notable that the applications were filed "based on intent to use," as opposed to "based on use in commerce," despite the fact that Nuka Cola appears frequently in both Fallout 3 and Fallout: New Vegas. This suggests that instead of attempting to protect an existing product, Zenimax has new plans for the Nuka Cola name.

When contacted, Zenimax offered no further information, but we can be reasonably sure the media company is not planning to launch a line of Fallout-themed soft drinks. Two of the trademark applications apply specifically to computer games and related electronic services, while the third applies to branded clothing items. About a year ago, Zenimax renewed its trademark on the Fallout name, however, so it's possible this Nuka Cola trademark may tie in to any upcoming sequels Bethesda has planned for the roleplaying franchise.
[Image: Zenimax Media]
In this article: Bethesda-Softworks, fallout, Fallout-New-Vegas, nuka-cola, trademark, zenimax-media
All products recommended by Engadget are selected by our editorial team, independent of our parent company. Some of our stories include affiliate links. If you buy something through one of these links, we may earn an affiliate commission.