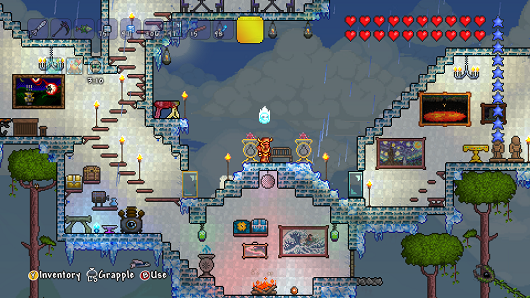 As expected, the console versions of Re-Logic's 2D sandbox platformer Terraria have been updated to version 1.2 today. The update brings a large list of bug fixes as well as improved gameplay mechanics and graphical changes to the PS3, Xbox 360 and Vita versions, such as a brighter sun and darker midnight portions of the game. Version 1.2's change log is a "direct copy from the PC change log with console exclusive changes added to them," putting the console versions more on par with the PC game.

The game has found massive success for Re-Logic on all platforms, topping 1.3 million downloads on iOS and Android and one million downloads across Xbox 360, PS3 and PS Vita as of late March. It first launched on PC in May 2011 and just hit Vita in December. The game's creator, Andrew Spinks, discussed plans for a sequel to Terraria in October, noting that it wasn't in development at the time.
[Image: 505 Games]
Show full PR text
Dig Deeper, Explore Further, Fight Meaner and Build Bigger
with Terraria on Console Today!

Terraria's HUGE 1.2 Content Drop has Landed on Consoles as a
Free Downloadable Update

Los Angeles, April 17, 2014 -- 505 Games today announced that Terraria will receive a massive content update, which will be made available for free on Xbox Live, PlayStation®Network and PlayStation®Vita platforms.

The 1.2 update sees a vast amount of content and features added to the original game, as detailed here: http://www.505games.com/terraria-console-1-2-update-change-log.

The free title update includes (but is in no way limited to!) the following:
Rain, blizzards, and a new snow biome with unique treasures and items for normal and hardmode versions
The sun is brighter and midnight is darker, along with several other graphical upgrades
Stalagmites, icicles, moss, plants, rocks and other "piles" added
New mini caves with unique backgrounds, and chests and pots with distinct graphics to each biome
The hammer is now used for creating slopes, halftiles and breaking walls only, whilst the axe is now only used for chopping down trees and giant mushrooms
Pickaxes will now remove blocks, placeable objects and items such as Life Crystals and chests
Players can now craft early-game magic robes and staves, whilst bricks, wood, stone and glass all now blend together
New hardmode jungle temple with beehives
Water will now change color based on the biome and depth that you are in, and there are several new fountains that will change the color of water when they are placed nearby
In addition, there are over 1,000 new items, including:
10 new ores
4 new wood types
31 new brick types
12 new wing types
29 new tinker combinations
Over 50 paintings that can be collected randomly throughout the world
8 new friendly NPCs
4 new bosses
Over 100 new enemies
Over 15 new pets that can be found in chests and dropped rarely off enemies
"We believe this massive content update opens up a new world of possibilities for Terrarians and we are delighted to be bringing this content to passionate Terraria fans who are experiencing the universe on consoles and handheld devices," said Richard Gittins, Senior Brand Manager at 505 Games. "The passion expressed by Terraria's community has fueled our ambitions to do justice for the original PC content, and with the delivery of this update, there really has never been a better time to get into Terraria and discover its delights. We look forward to bringing additional content to existing Terrarians as well as broadening out to new audiences throughout 2014 and beyond."

Terraria is an action-packed sandbox adventure that enables players to dig, fight, explore and build in a world they craft themselves. The original PC game, published by Re-Logic, has become an indie phenomenon since launching May 2011, achieving huge sales successes and garnering multiple award wins. 505 Games have since brought Terraria to a wider audience across console platforms as well as iOS and Android devices to high acclaim.

Terraria is available for console on Xbox Live, PlayStation®Network and PlayStation®Vita, and was recently released in stores across Europe as part of the Xbox Classic Hits range for Xbox 360.

To download assets for this announcement, click here. Look out for more exciting news about Terraria in the months ahead!

About 505 Games
505 Games is a global video game publisher focused on offering a broad selection of titles for players of all ages and levels. The company publishes games on leading console and handheld platforms as well as for mobile devices and social networks. Product highlights include, Sniper Elite V2, PAYDAY 2, Brothers - A Tale of Two Sons, Terraria, How To Survive, Tiny Brains and the upcoming Sniper Elite 3.

505 Games has offices in Los Angeles, Milton Keynes, UK, Lyon, Munich, Milan and Madrid and a network of distribution partners within the Nordic territories and Australia. For more information on 505 Games and its products, please visit www.505games.com.

###
In this article: 505-Games, microsoft, patch, playstation, playstation-vita, ps3, RE-LOGIC, terraria, update, vita, xbox
All products recommended by Engadget are selected by our editorial team, independent of our parent company. Some of our stories include affiliate links. If you buy something through one of these links, we may earn an affiliate commission.