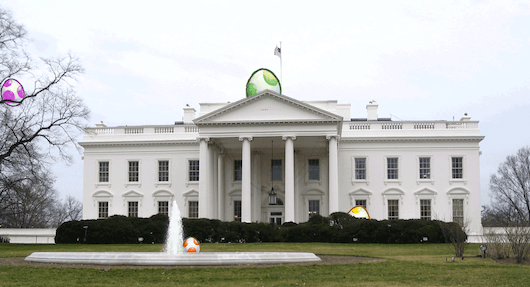 Nintendo will bring along its fitness-oriented games when it joins the National Park Foundation, the official charity of America's national parks, in attending the White House Easter Egg Roll. This year's theme is "Hop into Healthy, Swing into Shape," which means Nintendo bringing Wii Fit U and Wii Sports Club to the event is sensible, especially considering that the Egg Roll supports First Lady Michelle Obama's "Let's Move!" campaign.

Children will race each other at the Egg Roll, using long-handled spoons to roll eggs down rows of the White House's South Lawn. These eggs are actually crafted from hardwood and produced by the National Park Foundation though, presumably because letting a bunch of kids stomp yolks into the White House lawn is an awful idea.

It's clearly a missed opportunity for a sponsored Yoshi egg hunt however, and we've taken the liberty to mock up what could have been in the above image. Dozens of kids ascending the White House, conquering Secret Service agents in CQC before cracking open dinosaur eggs and releasing our Jurassic Park-esque future? Sounds more fitness-oriented (and more fun) than Wii Fit U.
[Image: Wikimedia/Nintendo]
In this article: easter, egg-roll, national-park-foundation, nintendo, white-house
All products recommended by Engadget are selected by our editorial team, independent of our parent company. Some of our stories include affiliate links. If you buy something through one of these links, we may earn an affiliate commission.