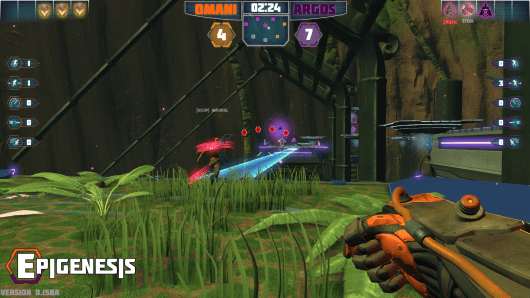 We're not sure at what exact point in time humanity will decide that sports could be spiced up with a few laser guns and death traps, but judging from years of pop culture, we know it's bound to happen. And when it does, you're going to want to be prepared. Thankfully, Epigenesis, a futuristic first-person sportsball simulator, has just added a new singleplayer mode so that you can practice your moves before being sent to the game grid.

The game's most recent update also includes a new map, called the Legacy Arena. This level is more vertically-oriented than most of Epigenesis' existing content, featuring a mineshaft that helps divide battling players into upper and lower playing fields. Because everything in the world, no matter how practical or unassuming, is always cooler when people with cybernetic augments fight around it.

Epigenesis won the Make Something Unreal 2013 competition, as well as Game of the Year at the 2013 Swedish Games Awards. It has been on Steam Early Access since November of last year.
[Image: Dead Shark Triplepunch]
Show full PR text
SINGLE-HANDLEDLY FIGHT FOR WORLD DOMINATION IN EPIC FUTURISTIC ARENA SPORTS GAME EPIGENESIS

KARLSHAMN, Sweden—April 17, 2014—Developer Dead Shark Triplepunch today announced Epigenesis , the award-winning online multiplayer sports/FPS ball game of the future, now includes a single player mode for any would-be cybernetic ball players looking for a match with other bots. In single player mode players can create a match with up to nine different AI opponents and practice their cybernetic ball game skills. Epigenesis is an online multiplayer arena sports game in which two sides are locked in an epic, never-ending fight for world-domination by playing ball, and is now in Early Access on Steam for $9.99: http://store.steampowered.com/app/244590.

The latest update also includes a new Legacy Arena level that introduces a mineshaft, giving players a height advantage but also exposing them to opponents’ projectiles. Jump pads are hugely important in the Legacy Arena; players can jump higher and use vertical space to their advantage to move faster around the map. However, the newly implemented light bridges provide a way to move around the arena without jumping. Players who still prefer to leap across the level can use smaller platforms that lead to pickups to help dominate their opponents. The arena also brings cover into play, enabling more tactical movement for ball and seed carriers.

Epigenesis won Make Something Unreal Live in 2013 hosted by Epic Games and won 2013 Game of the Year from the Swedish Game Awards. For more information about Epigenesis, please visit the website: www.EpigenesisTheGame.com .

About Epigenesis
Epigenesis is an online multiplayer sports/FPS game in which two sides are locked in a never-ending fight for world domination by playing ball. In this non-lethal ballgame of the future, players leap across platforms suspended high up in the air trying to get a ball located in the middle of the arena and score goals against their opponents. Each player carries a gravity cannon capable of pushing enemies (and friends) down from the heights of the arena.

When a player scores, he receives a genetically modified super-seed and gets the opportunity to plant it onto a platform to capture it. To win the game you must capture towers and construct a node system from your goal post all the way to your opponents' goal post. If this hasn't happened by the time that the clock reaches zero, the team with the most scores win!

Teamwork, tactics and precision is key to win eternal glory in a game of Epigenesis!

About Dead Shark Triplepunch
Dead Shark Triplepunch is an indie developer team consisting of 10 crew members based in the city of Karlshamn, which lies in the southern parts of Sweden. They are currently working on the Non-lethal FPS Domination/Ball game Epigenesis.
In this article: dead-shark-triplepunch, epigenesis, fps, indie, pc, sports, steam, steam-early-access, update
All products recommended by Engadget are selected by our editorial team, independent of our parent company. Some of our stories include affiliate links. If you buy something through one of these links, we may earn an affiliate commission.